Today we have something interesting for you all. As from half year Syrian Electronic Army is being on the news headlines and late last year group is on the list of FBI wanted also. Hackers group Syrian Electronic Army, who is popularly know for hacking online accounts of high profiled organisation and hacking High profiled site have got hacked today. Yeah... Today hackers have got hacked.

Today another popular Turkish hackers group "Turkguvenligi"  have hacked official site of Syrian Electronic Army, and also one sub domain of its site (leaks.sea.sy). Turkguvenligi,  is the same hacker group who have hacked OpenSSL website, two weeks ago.

Today, SEA got themselves on the victim box, and lastly SEA hackers have hacked about hundred of high profiled organisation site and online accounts, which includes Microsoft, Obama's official blog, New York times, Outbrain, True caller, Viber and many more..

But now they have failed to secure there own server. This shows that there is no 100 percent security.

At the time of Writing, SEA team have taken down there hacked site, But you all can see the Mirror of the hacked.

UPDATE:-
Turkguvenligi hackers have compromised the hosting service on which SEA's website was hacked. 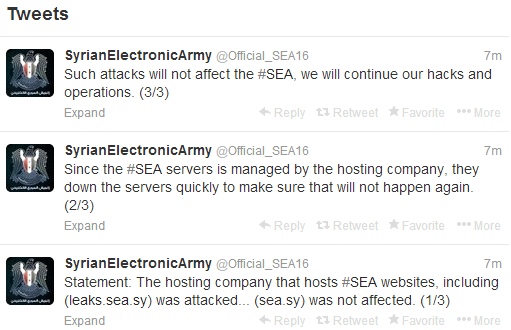 They have post the statement regarding this hack, as


The hosting company that hosts #SEA websites, including (http://leaks.sea.sy ) was attacked... (sea.sy) was not affected. Since the #SEA servers is managed by the hosting company, they down the servers quickly to make sure that will not happen again. Such attacks will not affect the #SEA, we will continue our hacks and operations.