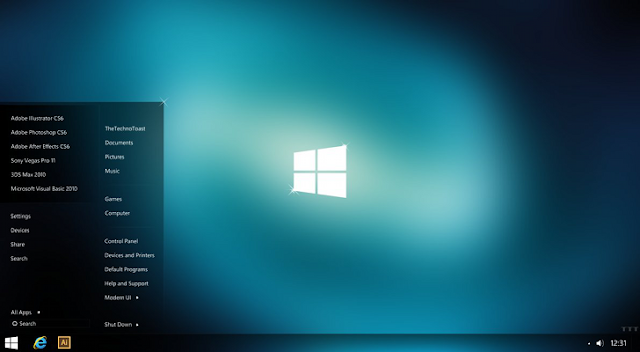 Few days ago Microsoft announced to release the new version Windows 8.1 pro, which can also be called as Windows blue. As per the source it is said that Windows 8 is decreasing the Windows users response, and hence Microsoft will be going to do something new and exciting to regain its users.
Lack of Start button on windows 8 leads to the fall in the users of Windows 8, and hence some of the users are asking about to get back the start button in the new version of windows.

Some days ago I have posted to get back the start button in today's windows 8. So if you want start button back then do read that post.

A new image of Windows blue that comes to the internet, revels that there will be start button the the Windows upcoming version. By the above image it is cleared that there will be the start button and this look of Windows Blue is pretty much gorgeous.
This dark dim light screen and the transparent look is much better then the previous one.
Now we can only wait tills its launched and see what will its actual first look.
#Microsoft