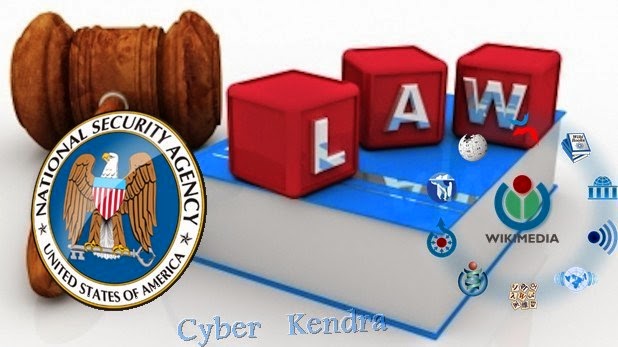 The Wikimedia foundation, which is an non-profit organization and also the group behind the Wikipedia has announced that it has teamed up with eight other organizations to file a suit against the National Security Agency (NSA) and Department of Justice (DOJ) in the U.S.

NSA contractor-turned-whistleblower Edward Snowden’s leaks which started back in 2013 reveals details about the NSA surveillance program that had totally changed the meaning of the users privacy.


Wikimedia getting together with other eight organizations including Human Rights Watch and Amnesty International USA, to challenge the NSA’s use of upstream surveillance to spy on correspondence between Web users in the US and overseas.

Wikimedia’s Michelle Paulson, senior legal counsel, and Geoff Brigham, general counsel says that the intelligence agency is violating their privacy by capturing the communications of peoples and spying on their activity.

They wrote, “Our aim in filing this suit is to end this mass surveillance program in order to protect the rights of our users around the world,”.  By violating our users privacy, the NSA is threatening the intellectual freedom that is central to people’s ability to create and understand knowledge.

Wikimedia thinks that NSA surveillance violates the US Constitution Amendment, first  Freedom of Speech and second Unreasonable Search and Seizure.

This is not the first time that organization came up together against NSA surveillance. Earlier also 100s of giants companies took the pledge to protect its users from NSA surveillance by adding at least one NSA resistant features into their respective service. And under this Many of they have implemented End-to-End encryption, added SSL and added Perfect Forward Secrecy (PFS) which is a public key cryptography tool to better secure the communication of Internet.

So will Wikimedia and Co. stand a better chance of successfully challenging the NSA on this occasion?  As Wikimedia believes it has sufficient evidence to establish standing, and wage a strong case.
#Internet #News #NSA