The campaign is one of the largest online protest in the Internet history, where more than 100 companies came together to protest two federal bills, the Senate’s Protect IP Act and the House’s Stop Online Piracy Act (SOPA). Thousands of websites went dark over the internet to stop mass surveillance conducted by the government. 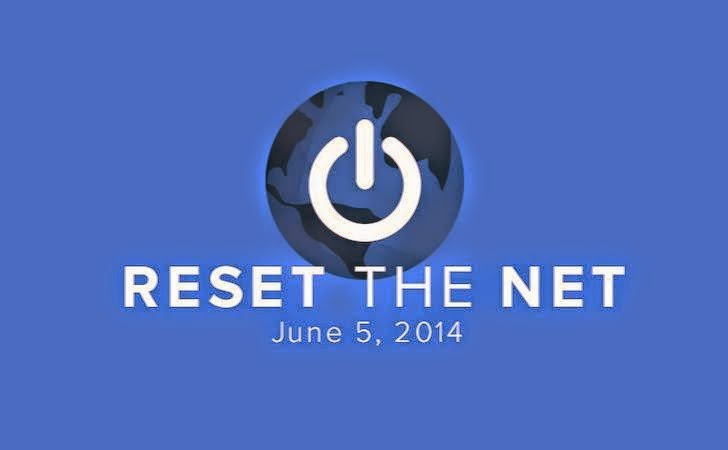 Its seems that PRIVACY of a user from the internet is almost dead. Last year on today's date only Edward Snowden have leaked the documents about the mass surveillance carried out by NSA and other countries intelligence agencies on every citizen of their country. After the leaked of the number of documents related to U.S. National Security Agency (NSA), encouraged Internet users think about their privacy and digital rights.

For this many of the Internet giants firm have came together to started several campaigns to block mass surveillance and fight back against the U.S. National Security Agency (NSA).

RESET THE NET
A wider coalition of more than hundreds of Internet companies and civil liberties, environmental and political organizations is arriving together with a global call to “Reset the Net” that aimed to beat government and corporate surveillance on the web making mass Internet surveillance more difficult for the NSA and other spy agencies and governments.

The campaign is one of the largest online protest in the Internet history, where more than 100 companies came together to protest two federal bills, the Senate’s Protect IP Act and the House’s Stop Online Piracy Act (SOPA). Thousands of websites went dark over the internet to stop mass surveillance conducted by the government.

Earlier also we have posted the list of the 100+ companies who are joining the campaign and along with then several civil liberties, environmental and political organizations have supported the Campaign.

The coalition includes Web sites such as Google, Facebook, Yahoo, Microsoft, Wikipedia, Wordpress, Reddit, Boing Boing, Imgur, DuckDuckGo, the Free Software Foundation, CREDO Mobile, along with a number of organizations like the Freedom of the Press Foundation, Demand Progress, the Open Technology Institute, the Libertarian Party.
The groups are encouraging developers to add at least one NSA resistant feature to mobile apps and Internet users to use privacy and security tools such as a secure version of HTTP i.e. HTTPS, HTTP Strict Transport Security (HSTS), a Web security policy tool, and Perfect Forward Secrecy (PFS) which is a public key cryptography tool to better secure the communication of Internet.