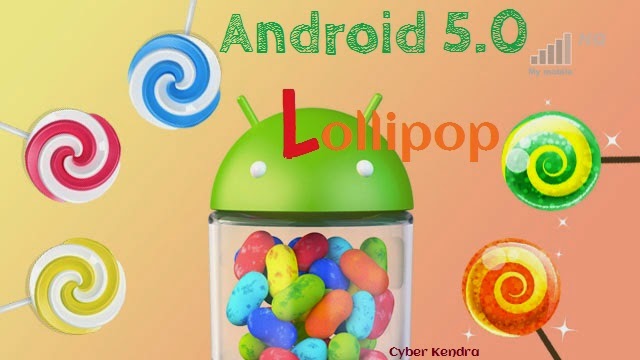 Now here is the great news for all the android lovers that Search giants Google have finally announced the latest version of android and reveals its name as "Lollipop". There was many rumors about he name of the android next version and many of the source states its as "L".

Finally today Google announced next version of Android OS will be called Lollipop. In the latest version of Android 5.0, it will have over 5,000 APIs and a new design approach called Material Design that is supposed to create a consistent feel across multiple devices including gadgets running Android Wear and vehicles equipped with Android Auto.

With the new look up new Android OS has also got more things like  fluid animations, a cleaner design with a bolder color palette, a revamped multitasking menu, and offers new ways to interact with your voice. Many of the new Material Design features can be seen in the recent updates that Google has released for its own Android apps such as Google+. The Material Design initiative is meant to unify the software's look and feel across various form factors, whether that's a tablet, smartphone, home media streamer, or something else.

On the release of the  Android Lollipop, Google have also focused on the security of the latest OS. The OS supports a kill switch that makes a stolen Android device worthless unless they know the password to reset it. As Google announced earlier that next Android OS version i.e Android L, will have encryption by default, so here Google have also turned on encryption by default which judging by the resent security snafus is a good thing.

As Google have gave the whole new look in the interface of the Android Lollipop which is called as material Design. Just check the video demonstration of the Material Design .