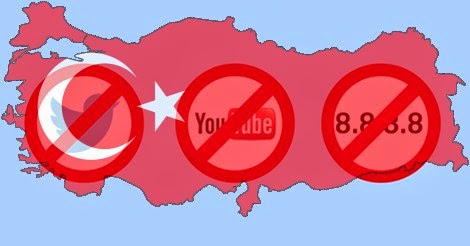 After the banned on the biggest Social Media platform "Twitter", Turkey Government have also banned YouTube within the week of it. This is all because of an audio clip was leaked on YouTube and Twitter about the massive corruption of Turkey Prime Minister Recep Tayyip Erdoğan instructing his son to dispose of large amounts of cash in the midst of a police investigation.

On Saturday Google Security team have note on the blog post that, Turkish Internet Service Provider (ISP) have set up servers that masquerade as Google’s DNS service, for blocking the service like YouTube and Twitter on the country.

On this, Google have done a their own research and have received several credible reports that Google’s Domain Name System (DNS) service has been intercepted by most Turkish ISPs (Internet Service Providers).

Google operates DNS servers because we believe that you should be able to quickly and securely make your way to whatever host you’re looking for, be it YouTube, Twitter, or any other.

But imagine if someone had changed out your phone book with another one, which looks pretty much the same as before, except that the listings for a few people showed the wrong phone number, he added.

Now you know that intercepting Google DNS, can lead and redirect massive users to a particular host or to any fraudulent site. This is what the Turkish government have done.

This is not the first time that any government have done this. Earlier also different government have opted these kind of activity to keep the silence on the mouth of the country citizens.  In 2011, the regime of Hosni Mubarak in Egypt attempted to turn off the internet in a fruitless bid to stop the building revolution against him.

This is how Government tries to make silence on the peoples mouth and  snatch their right to Speak. We like hear from you all, what your views on this? Comment below, and have a Discuss on Hack Voice.
#Censored #News #Twitter