After the reporting the bug on the Facebook Khalil didn't got any reward from the facebook team, but later on open security researcher team have donated as a reward for his work. 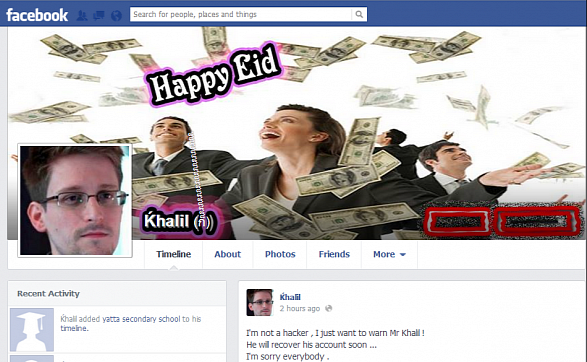 “I'm not a hacker , I just want to warn Mr Khalil ! He will recover his account soon ... I'm sorry everybody.”

After getting the confirmation, Khalil stats that his account was hijacked, hackers use the brute-force method to hijack the accounts.  Khalil says that, from 2 weeks earlier hacker have started brute-forcing his mail account that was associated with his Facebook accounts and today hackers got success.
He also mention that,


i was not able to recover it through my mobile as facebook limited recovering sms , every day i got recovered password to my email and my mobile asking me to recover my facebook account , all hacker on the word want to hack my account , even they always know that i can recover it.