There is a another big news regarding the same sophisticated attacked that were being done by the hacker on Facebook, Twitter, Apple. Over the last week there was a much, up news regarding the  attack done on the social network and other IT corporate firm or organisation.

As yesterday Apple have have accepted that  they were also get into the victims of the hackers with malware of Java zero day vulnerability. And now iPhone Dev SDK have also announced that they were also being in the list of this attack.
iPhone Dev SDK ahave admitted that their system were compromised and used for to host the java exploit.
iPhone Dev SDK have also have a talked to the Facebook security team and the others firms with the Vanilla, amazing forum of ,  to ensure the problem was not with their software.
One of the administration account was compromised of iPhone Dev SDK, and was  used to inject the java script on their website by the hackers.
iPhone Dev SDK is still trying to find when the attack was occurred by it have notified that attack was ended from the hackers end on 30th January 2013 only.
Snap shot of the iPhone Dev SDK forum where they announced that they also been victim. 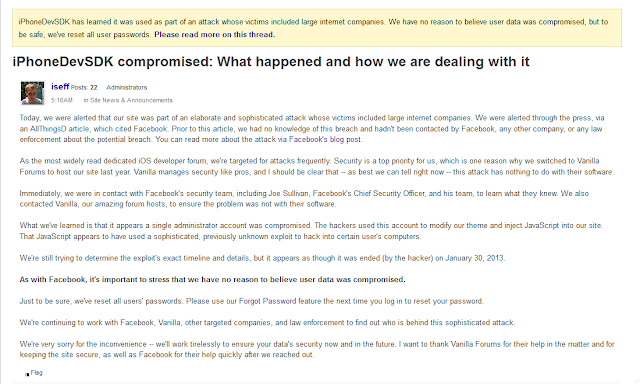