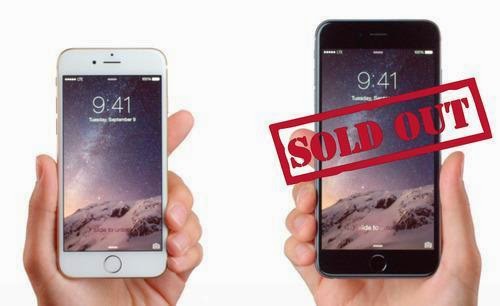 Its just three days before Apple have announced its first big screen smartphone iPhone 6 plus,  and iPhone 6. The pre-order has been started from yesterday and users from around the world was awaiting for this. The announcement of big screen iPhone had given hard competition to Samsung and Android phones.

At the iPhone announcement Apple store went offline and same thing happens yesterday also on the pre-ordering of iPhone 6 and iPhone 6 plus. Many users have reported errors and delay's yesterday not due of any technical error but of huge demand.

Same scenario is with carrier's sites and third party vendors also, the demand of iPhone 6 and iPhone 6 Plus was huge and Apple made a sales record. Mark Siegel, the AT&T spokesman, told Re/Code that the demand was higher than for iPhone 5 and iPhone 5s. Also, Verizon delayed the shipping for the 64GB iPhone 6 Plus to October because there were no phones left to sell. Apple themselves were showing shipping times of up to four weeks on the same model.

After the 9 hours of pre-ordered, an Apple representative said "the overnights sales of the new iPhones set a record." They did not say how many were sold and that is usually because Apple only confirms numbers after the first weekend, when all the figures come out from various stores and carriers around the world.

With this one day sales, Apple stock has also rise up. There were increment of 0.23 percent on the Apple stock. Apple says that they will bring iPhone to 115 countries till the end of this year. Experts says that if the users demand remains same then Apple will sold 70 million iPhone till next year.