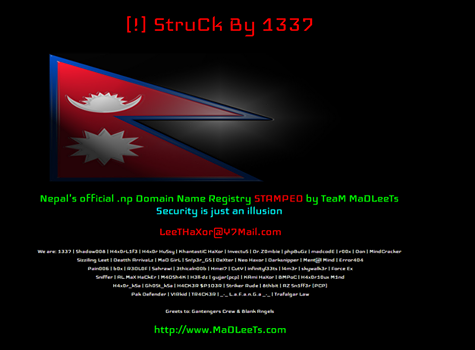 Its a long time that a popular hackers group from Pakistan "Team Madleets" were silent, where its core member with the online handle "Leet" have not done any hacking attempts. But once again Leet has show its presence in the cyber space.

Today Morning, hacker Leet have once again targeted Domain Registry of a country, where  he has hacked and deface the Official Domain Registry of Nepal.  This time hacker have not defaced the homepage of the site, he has uploaded his deface page on the image directory of the site (http://register.mos.com.np/img/1337.html ).

As like earlier deface page, this time also hacker have posted a country flag on the deface page with a single line message -

Leet was the same hacker who have hacked number of NIC domains, number of Domain Registrar, Google  Malaysia, Burundi, Kenya and other high profiles sites too.
#Defaced