Once again a famous hackers group "Syrian Electronic Army" which are popular for hacking number of High profiled site, and major organisation online accounts, mainly Twitter, have once again hit the cyber space of US and hacked one more high profiled site.
Today, group have hacked the major website of US (www.vice.com), an US based international magazine focused on arts, culture, and news topics. Hackers have managed to access to the administrative panel of the site, and redirect a site to there own site. 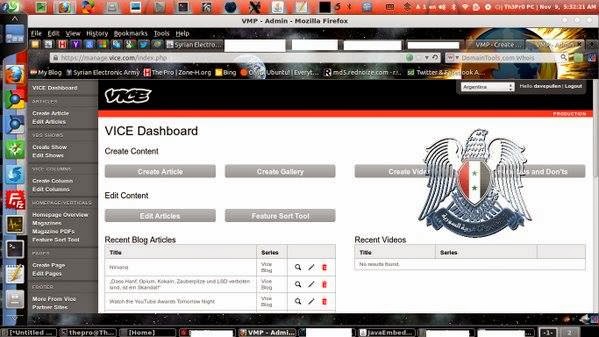 "Dear the @VICE, Your website was hacked in order to deliver a message" , Hackers tweeted on the twitter.

After hacking the site, hackers have post a article on the site saying,

"we have Your website was hacked by the Syrian Electronic Army. This time we just deleted the article that you claimed in it that you exposed "Th3Pr0" identity. But you didn't. You published names of innocent people instead".

Hackers also given a warning message by saying, to delete all the website next time.
#Security #Syrian Electronic Army