Indian Defense Ministry have order to the Intelligence team to investigate on the infected system of DRDO which was breached yesterday  by the Chinese hackers. 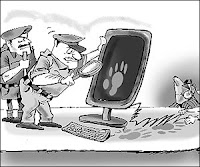 As i have posted that yesterday Defense Research and Development Organisation (DRDO) system have been breached and hackers stole thousands of the sensitive and important data. This hacked was discovered by the representative of National Technical Research Organisation (NTRO) working with the expert of private security firms. Researcher have found a malicious file with the hacked email accounts that cause to the lose of many of the confidential and important data.
This malware infected the other system of the DRDO networks. After the disclosure of the attack, expert finds that attack may be made by the hackers from the china, just because the stolen data was uploaded in one of the server that was located on China.
Till now investigator didn't have any perfect evidence of this security breach. Thus Defense Ministry order to investigate on this issue and get the detail info and also get all the details of the threats that have caused damaged.
#News #Security