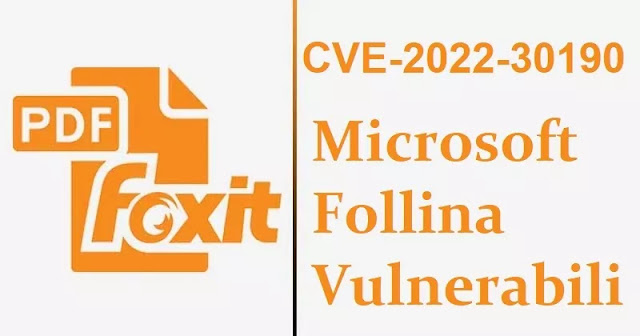 Last week cybersecurity researcher Nao_sec discovered a zero-day vulnerability in Microsoft Office dubbed Follina. The bug can be exploited through the normal opening of a Word document, using it to execute malicious PowerShell commands through the Microsoft Diagnostic Tool (MSDT).

"An attacker who successfully exploits this vulnerability can run arbitrary code with the privileges of the calling application, and can then install programs, view, change, or delete data, or create new accounts in the context allowed by the user's rights."" Microsoft explains.

Today, a Twitter handle @j00sean has demonstrated that the Follina bug (CVE-2022-30190) also triggers in the Foxit PDF reader.

Tonight while testing PDF Readers, i found a way to trigger CVE-2022-30190 aka #Follina bug in Foxit PDF Reader. This doesn't work in Adobe because of sandbox protections. pic.twitter.com/YmYQl3Z4jI

In the POC, the researcher demonstrates the exploit in the Foxit PDF reader version 11.2.2.53575 which is the latest version (according to the version history) of the application at the time of writing. Foxit has not issued any updates for the application nor any security advisories regarding the issue.

The researcher also published the payload for the Foxit PDF reader, but for successful exploitation, users need to allow the connection on the security warning popup.

A security researcher, Kevin Beaumont explains that the document uses the Word remote template feature to retrieve an HTML file from a remote webserver, which in turn uses the ms-msdt MSProtocol URI scheme to load some code and execute some PowerShell.

Later on, the researcher also explains that the Follina bug can also be exploited using ms-search MSProtocol.

CISA has also urged users and administrators to review Microsoft's Guidance for CVE-2022-30190  and apply the necessary workaround.

It is been reported that Chinese-linked threat actors are also actively exploiting a Microsoft Office zero-day vulnerability.  The TA413 APT group, a hacking outfit linked to Chinese state interests, has exploited the vulnerability by targetting the international Tibetan community.

Proofpoint noted that European governments and US local governments were the targets of a phishing campaign using malicious Rich Text Format (RTF) documents designed to exploit the Follina vulnerability.