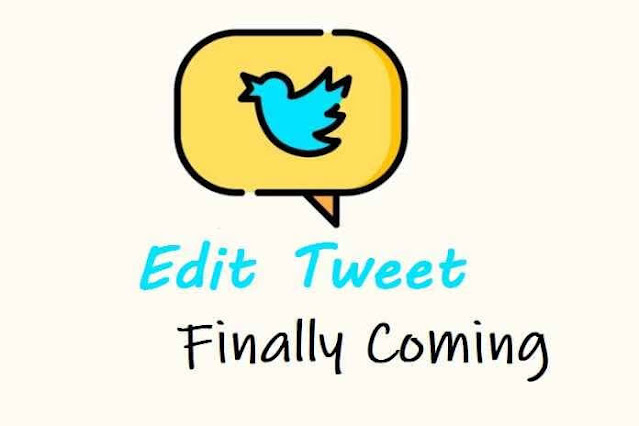 Twitter has finally confirmed that they are working on the "Edit" feature. This was a long-awaited feature since last year.

Initially the news of the Edit feature on Twitter come up on 1st April (joke day) from Twitter's official account stating, "We are working on the Edit button". Later Tesla CEO, Elon Musk tweeted a poll, asking for a vote regarding the Edit button on Twitter. With 80 million-plus followers, the poll gets a total of 4,406,764 votes with 73.6% of users supporting for Edit feature.

The next day, A Securities and Exchange Commission filing revealed that Musk had taken a 9.2% stake in Twitter. This is the highest percentage of the stake held by any holders. With the  9.2% stake, Twitter CEO Parag Agarwal welcomes Elon Musk to the Twitter board meetings.

Later, Twitter confirms it's been working on a long-awaited edit feature. The edit button will be tested later this year on Twitter Blue, a $3-a-month subscription service that lets you undo tweets and read ad-free articles.

now that everyone is asking…

yes, we’ve been working on an edit feature since last year!

no, we didn’t get the idea from a poll 😉

we're kicking off testing within @TwitterBlue Labs in the coming months to learn what works, what doesn’t, and what’s possible.

Today, Twitter confirms the rolling out of the Edit tweets features. As reported earlier, the feature will initially be available to subscribers of its paid tier, Twitter Blue.

For note, Twitter Blue is currently available only in Australia, Canada, New Zealand, and the U.S., and Twitter shared much information for the rolling out in other countries.

The Modify Tweet feature's guidelines are straightforward: Eligible users have a 30-minute window to edit their tweets, and the edited tweet will appear with a label displaying the timestamp of the modification. Readers of the tweet can tap the label to observe the tweet's editing history.

As an edit feature on tweets allows users to change the content, this may cause misinformation. Here a question arises how much a tweet can be edited? To prevent the misuse of the edit button, Twitter has added safeguards. Users will be allowed to make changes for only 30 minutes after their original tweet is posted with 5 times changes only. After an edit, the tweet will bear a label to show it has been modified. Clicking the label will let viewers see the history of the edits.