Microsoft-owned GitHub has released updated versions of its local client for code revision control after fixing a couple of code execution vulnerabilities.

According to GitHub, the first vulnerability, CVE-2022-24765 affects users working on multi-user machines where untrusted users can create a C:\.git\config (on Windows system) directory which would be picked up by Git operations run supposedly outside a repository while searching for a Git directory.

"Since some configuration variables (such as core.fsmonitor) cause Git to execute arbitrary commands, this can lead to arbitrary command execution when working on a shared machine." Github security engineer Taylor Blau noted.

According to the security advisory, users

The second vulnerability (CVE-2022-24767) affects the Git for Windows uninstaller, which runs in the user’s temporary directory, vulnerable to dynamic link library (DLL) hijacking, as the high-privilege SYSTEM account inherits the settings pointing TMP and TEMP to the C:\Windows\Temp world-writeable account. This vulnerability has been discovered by Lockheed Martin Red Team.

"the default system settings for TMP and TEMP are to point to C:\Windows\Temp, a folder that is world-writable (for historical reasons), and the SYSTEM user account inherits those settings. This means that any authenticated user can place malicious .dll files that are loaded when Git for Windows' uninstaller is run via the SYSTEM account." - the advisory reads.

Both the above vulnerabilities have been fixed in the latest version of Git, so it is highly recommended to upgrade to Git v2.35.2. This version changes Git’s behavior when looking for a top-level .git directory to stop when its directory traversal changes ownership from the current user. If you wish to make an exception to this behavior, you can use the new multi-valued safe.directory configuration.

If you can't upgrade your Git right now [for any reason], you can follow the below steps to reduce the risk.

NotGitBleed: Credentials Leaks on GitHub and Other Datastores 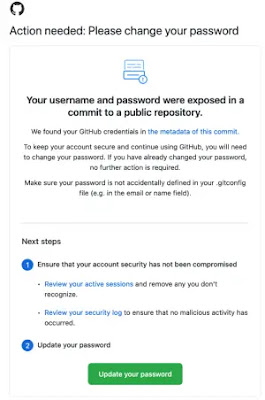 Apart from the above advisory, GitHub also wrote about the detection and revoking of leaked passwords, that were found on the public repositories.

In the blog post, GitHub says that it will scan public repositories for accidentally leaked GitHub login credentials, to prevent attackers from finding these. If a user accidentally exposes their username and password in code or commits metadata, GitHub will automatically reset their password and inform them via email.

Will Deane, Director and Principal Consultant at ASX Consulting, and Aaron Devaney, Principal Security Consultant at MDSec, have uncovered the threat of exposed passwords in GitHub. We have already written about their research named "NotGitBleed".