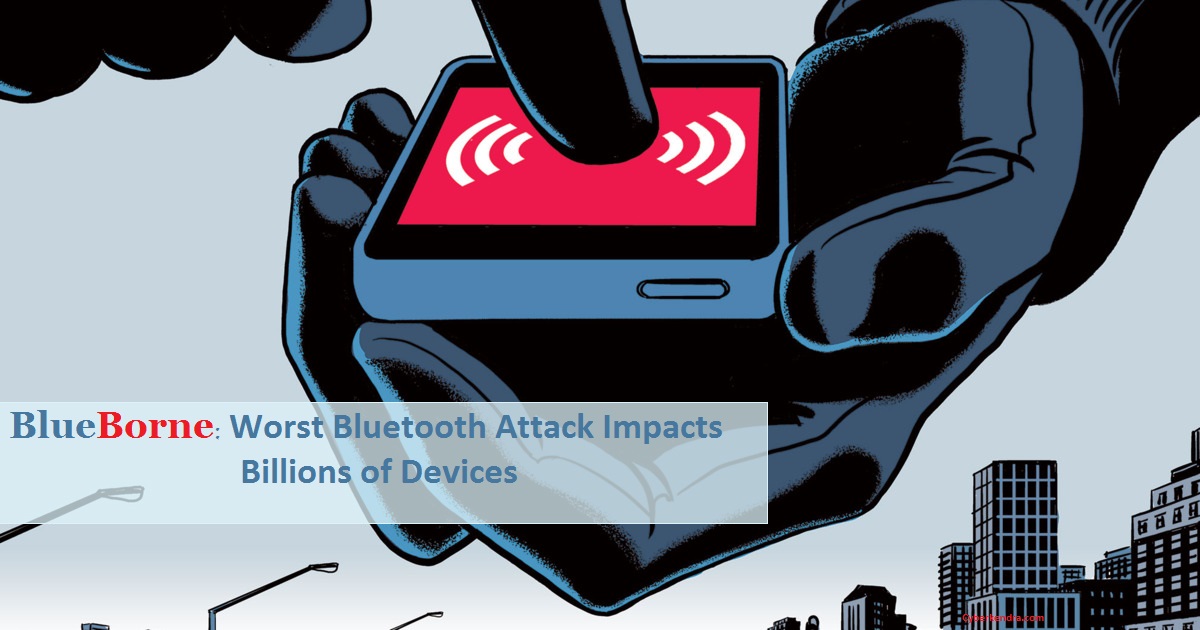 After WannaCry, here is another destructive and worst situation for almost all gadgets and smart devices. About 8.5 billion devices with the Bluetooth featuring are at risk of the newly discovered malware attack.

All the smart devices and gadgets which are having the Bluetooth features and use Bluetooth for the connectivity and communication are remotely vulnerable to the new malware attack called "BlueBorne".

Researcher at Armis Lab have found this new way of malware attack, BlueBorne which is much effective as it can be spread without the victim doing anything or noticing it. once one device has been infected, the malware can spread to other devices nearby with the Bluetooth turned on. By scattering over the airwaves, BlueBorne is "highly infectious," Armis Labs said.

Generally, for spreading the malware, victim have to click on the link or download some file or app, but here it is different. To spread BlueBorne, just device should have Bluetooth turned ON, and it infects users without doing anything.

What is BlueBorne?
BlueBorne is a collection of eight zero-day vulnerabilities that Armis Labs discovered. BlueBorne is an attack vector by which hackers can leverage Bluetooth connections to penetrate and take complete control over targeted devices. BlueBorne affects ordinary computers, mobile phones, and the expanding realm of IoT devices. The attack does not require the targeted device to be paired to the attacker’s device, or even to be set on discoverable mode.

BlueBorne vulnerability affects devices on most operating systems, including those run by Google, Microsoft and Apple.

Ben Seri, Armis Labs' head of research, fears that BlueBorne will lead to a similar massive outbreak. In several trials testing out BlueBorne, researchers were able to create botnets and install ransomware using Bluetooth, all under the radar of most protection.


Here is the Video demonstration of the BlueBorne, taking control over Android

What You can Do?
Here is good news that tech titans, Apple, Google and Microsoft have already patched the BlueBorne bug, and Apple have already confirmed that BlueBorne is not an issue for its mobile operating system, iOS 10 (which was released yesterday - Public version).
Microsoft had released the patch for this in July only and Google says that its Android partners will receive the patch in early August. Now its carriers concerns how fast they pushed the patch for there devices.

Worse Thing Going to Happen
Worst things is that, about  2 billion devices using Android, about 180 million are running on versions that will not be patched. Of the potentially impacted devices, Armis Labs estimated that 40 percent are not going to be patched. That's more than 2 billion devices that will be left vulnerable to attacks, they warned.
#Apple #Bluetooth #Google