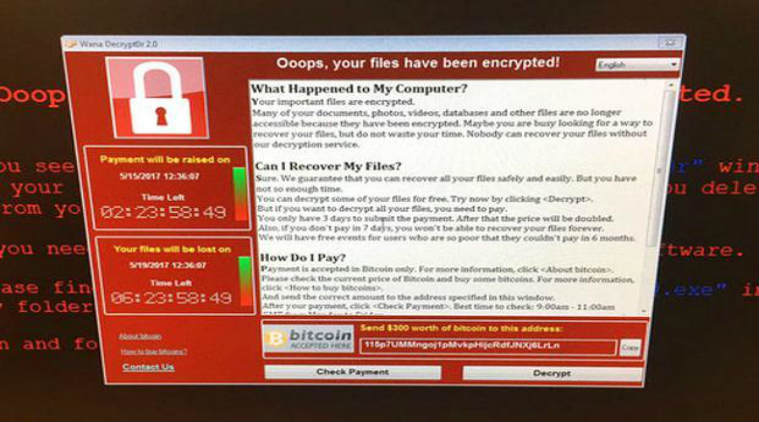 A Massive cyber attacks using an ransomware named "WannaCry" have been done that was stolen from the US national Security Agency (NSA). A security firm Avast have reported that they have identified 75,000+ systems that were affected by the WannaCry ransomware or a variants of it.

According to the reports, this is biggest cyber threats that happened globally infecting 100 countries within 24 hours. All the biggest countries, Russia, China, etc have been infected by this Ransomware.

There were about 40 National Health Service (NHS) that have been hit with this threat, with operations and appointments cancelled. Most of them were affected in England and Scotland.

The malware spread quickly on Friday, with medical staff in the UK reportedly seeing computers go down "one by one". NHS staff shared screenshots of the WannaCry programme, which demanded a payment of $300 (£230) in virtual currency Bitcoin to unlock the files for each computer.

Victim of WannaCry Ransomware.
Some reports said Russia had seen more infections than any other single country. Domestic banks, the interior and health ministries, the state-owned Russian railway firm and the second largest mobile phone network were all reported to have been hit.

In Spain, a number of large firms - including telecoms giant Telefonica, power firm Iberdrola and utility provider Gas Natural - were also hit, with reports that staff at the firms were told to turn off their computers.

People tweeted photos of affected computers including a local railway ticket machine in Germany and a university computer lab in Italy.

France's car-maker Renault, Portugal Telecom, the US delivery company FedEx and a local authority in Sweden were also affected.

China has not officially commented on any attacks it may have suffered, but comments on social media said a university computer lab had been compromised.

Where it Come from ?
WannaCrypt ransomware was stolen from the National Security Agency (NSA), that were made public by group of hackers known as The Shadow Brokers.

The reports says that this exploit was mainly for targeting Windows systems loophole  that was identified by NSA. For this security weakness Microsoft had already released a security patch in March. System that had been updated with the patch were in safe side.
#NSA #Ransomware #Security