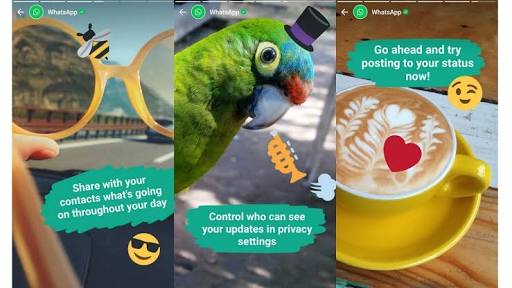 Facebook owned popular instant messaging service have today announced another great new features called "WhatsApp Status" to its service. With this Status, now WhatsApp is competing with its rival Snapchat.

As the same feature is already available in Snapchat, but WhatsApp will have little different. This Status feature allows users to decorate photos, videos and GIFs that disappear after 24 hours.

Earlier WhatsApp was testing this feature for beta users, but now it's been rolling out world wide for iOS, Android and Windows platform too.

Users can watch updates from friends and reply privately, shoot and adorn their imagery with drawings and captions and send their creations to all their contacts they’ve chosen with a persistent privacy setting. Sending media to specific friends is still done through message threads.

Now WhatsApp has 1.2 billion monthly users, with users sending 60 billion messages per day, including 3.3 billion photos, 760 million videos and 80 million GIFs. WhatsApp is parleying this success in messaging back into broadcast social media in a way that could spell trouble for Snapchat.