Google latest flagship Google Pixel which is one of the secure smartphone has been pwned this week by group of Chinese hackers. Another thing that Google mentioned is that it's hard to root the Pixel smartphone, but a developer named Chainfire had made that possible.

Yeah.. you read write..! Rooting Google Pixel phone is possible and that also in simple steps.
Last week Chainfire have posted on his Google+ post about the rooting of Pixel and Pixel XL and successfully installed SuperSU app on device.
Root access for the Google Pixel and the Google Pixel XL is available by installing SuperSU 2.78 SR2, which enables suaccess without touching anything in the system partition and allowing for dm-verity to be 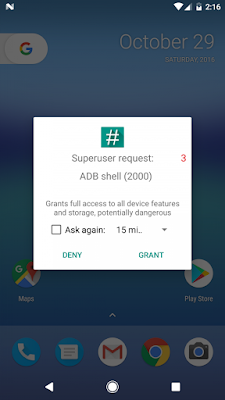 toggled. Before you can root your device, you will first need to have your bootloader unlocked. The first step in unlocking your bootloader is to download the adb and fastboot binaries (we recommend grabbing Minimal ADB & Fastboot from our forums) and then installing the appropriate Google USB Driver for your machine.

The detailed information on rooting Google Pixel and Pixel XL devices can be found on xda-forum. Where every required tools and steps have described in detail.

Note: Rooting your smartphone would void the phone’s warranty and could also lead to the phone bricking. Proceed at your own risk.