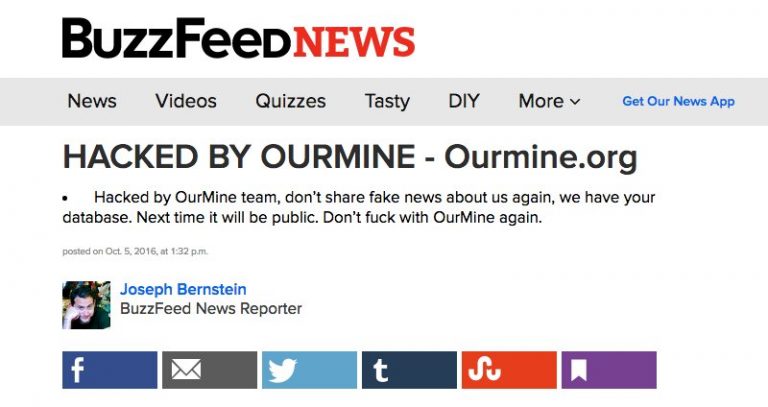 Remember OurMine hackers team? Yeah.. the one who had hacked several tech CEO's online account including Google and Facebook CEO's.

This time they have targeted online magazine site BuzzFeed.com. OurMine team have hacked BuzzFeed and posted the following message with a title 'HACKED BY OURMINE- OurMine.org'.


Hacked by OurMine team, don’t share fake news about us again, we have your database. Next time it will be public. Don’t fuck with OurMine again.

At the mean time the post made by hackers have been deleted, but you can see the cache view of the post.


On the blog post hacked have mentioned the reason for hacking, which says


"Why we hacked it? Alright, yesterday Buzzfeed Created a post that we are only 1 member called Ahmed Makki, and we can confirm that we don’t Have a member called ” Ahmed Makki ” and we are now 4 we were 3 but someone joined, and we hacked it because they are reporting fake news about us".