'Net Neutrality', Save The Internet 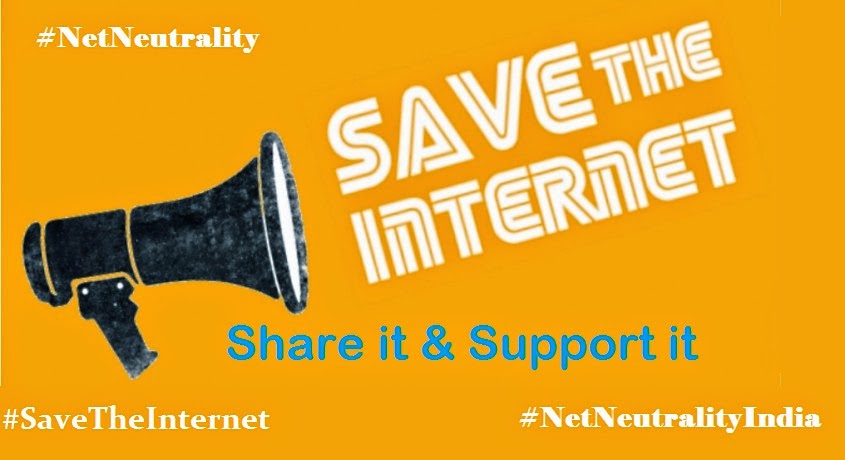 Let me tell you What is Net Neutrality ?
'Net Neutrality' is simply the Internet Freedom of Free, Fast and Open for all. Internet is built around the idea of openness. It allows people to connect and exchange information freely, if the information or service is not illegal. Much of this is because of the idea of net neutrality. If you like the current state of the internet, then it is because of net neutrality.

When the internet started to take off in 1980s and 1990s, there were no specific rules that asked that internet service providers (ISPs) should follow the same principle. But, mostly because telecom operators were also ISPs, they adhered to the same principle. This principle is known as net neutrality. An ISP does not control the traffic that passes its servers. When a web user connects to a website or web service, he or she gets the same speed. Data rate for Youtube videos and Facebook photos is theoretically same. Users can access any legal website or web service without any interference from an ISP.

Currently, India is having the issue with the Net Neutrality. Telecom Regulatory Authority of India (TRAI) is planning to allow telecom operators like Vodafone and Airtel to block applications and websites in order to extort more money from consumers and businesses, which is nothing but an extreme violation of Net Neutrality.

What will happen if there is no net neutrality?
If there is no net neutrality, ISPs will have the power  to shape internet traffic so that they can derive extra benefit from it. For example, several ISPs believe that they should be allowed to charge companies for services like YouTube and Netflix because these services consume more bandwidth compared to a normal website. Basically, these ISPs want a share in the money that YouTube or Netflix make.

If there will no Net Neutrality then we don't have the free access of Internet. There will be separate package plans for each service we want to use. For Example - If you want to use facebook the you have to pay separately and for Whatsapp also pay separately.

What to Do Now ?
TRAI has released a consultation paper with 20 question and wants people to answer it and revert it via email by 24th April, in order to hear people’s opinion on Net Neutrality. So If we all come together and support Net Neutrality, then we can make internet openness.

Lack of net neutrality, will also spell doom for innovation on the web.

For the a YouTube channel All India Bakchod (ABI) had released a video asking  people to Save the Internet. Do watch the video to understand the issue of Net Neutrality.
#Censored #India #News