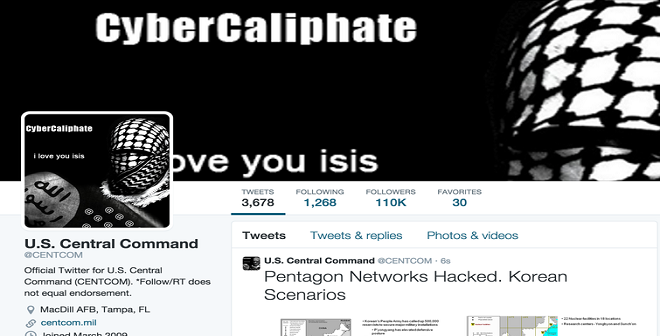 After the speech of US president Barack Obama on cyber security at FTC, The United States Central Command's Twitter and YouTube accounts got hacked by the hackers going with the Online alias "CyberCaliphate" which claim to be affiliated with ISIS

NBC news reports that US official have confirmed about the hack. Hackers have hacked the twitter account and tweeted fake news from the US Centcom accounts. One of the tweets read the following - “ISIS is already here, we are in your PCs, in each military base,”.

A Pentagon official told the Wall Street Journal none of the released data was highly classified. Some of it is readily available on public websites. White House official says, white house is currently investigating the incident,

You can check the numbers of tweets that were made by the hackers from the Centcom twitter accounts from the below image.
Please include attribution to http://www.cyberkendra.com/ with this graphic.

This story is in developing, we will update the post as we get further updates.
#Hacking #News #Security