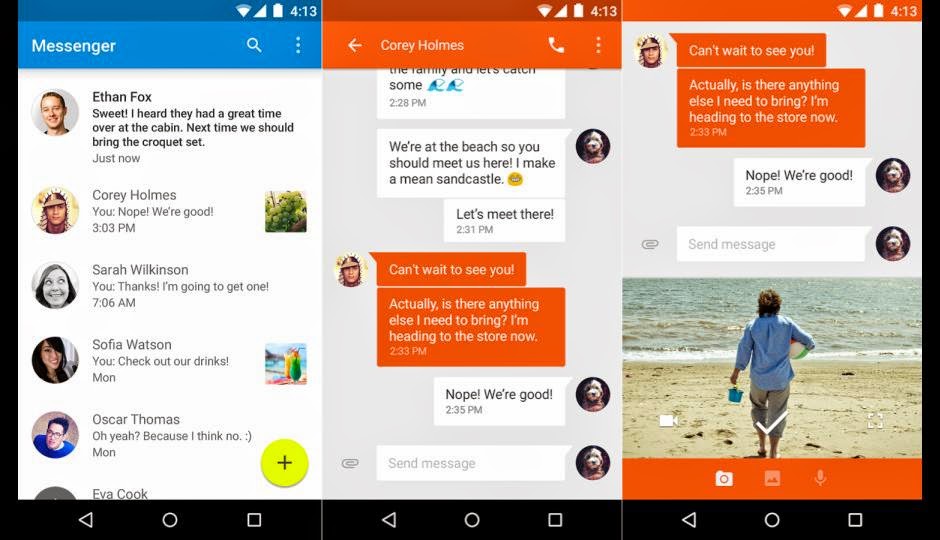 As people are very fond of messaging and chatting there dear ones and with this there are many such service which is getting much popular among them. Service like Whatsapp, hike, viber etc which are providing free messaging and calling service are very much liked by users. With this Facebook had also introduced its messaging app for faster and better chatting.

On this list another service has been added, which is introduce by search giants Google. Google had released its messaging app called "Messenger" for android platform. This new app comes with the Google latest Material Design interface which gives a smooth and cool looks. Messenger supports devices running Android 4.1, Jelly Bean, and above.

As like other messaging service Google Messenger lets you send and receive SMS and MMS messages to any phone. You can also send group texts and images,videos and audio messages to texts. The Messenger lets you search through contacts and conversation threads. It also gives you the option to block SMS senders. The other feature of the Google messenger which keep it different from other service is it include coloured text threads, archiving messages and emoji (stickers) support.

Google another chatting and video calling service Google Hangouts is still there and even of that Google introduced its messaging app. We think that Google took this steps for its mobile users as there are many users who are not able to use Hangout features and Google still want to connect its users via a mobile device.