The two Romanian nationals, named as Nicolae Popescu and Dumitru Daniel Bosogioiu have made it to the FBI’s Most Wanted Cyber Fugitive List after participating in a long-term cyber-fraud conspiracy that inflicted losses of over $3 million on US businesses.

High level of Online Scamming
According to the FBI, Popescu ran a multimillion dollar cyber-fraud scheme on US-based car-trading websites Cars.com and AutoTrader.com. eBay and other similar sites were also used by the fraudsters, who posted advertisements for cars, motorcycles, boats, and other high-value items that had a price range from $10,000 / €8,000 to $45,000 / €36,000.


These criminals have designed there phishing offer so well that it completely looks genuine. Fake invoices that were seemingly issued by legitimate online payment services were sent to the buyers, along with instructions for depositing the money in a US bank account, which belonged to the conspirators.
The US bank accounts receiving the money would be set up by the crooks using fake documents. In this fraud both criminals allegedly made around $3 million in ill gotten moolah.

On the statement FBI wrote- 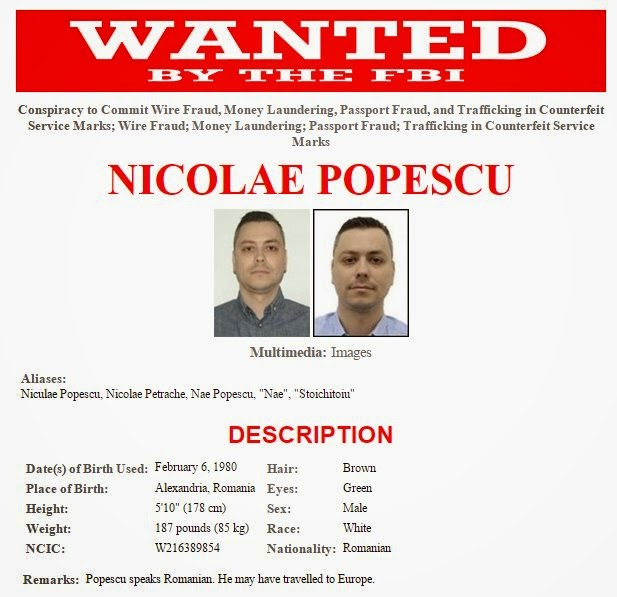 fired passport makers based on the quality of the fake passports they produced, supervised co-conspirators who were responsible for placing the fraudulent ads and corresponding with the victims, and ensured that the illicit proceeds transferred to the U.S. bank accounts were quickly collected and transferred to himself and others acting on his behalf in Europe.

Dumitru Daniel Bosogioiu is also on the list, with a bounty of up to $750,000 / €600,000 for details leading to his arrest. Both of them have been charged along with 11 others. They managed to escape an international takedown in December 2012.
#Cyber Fraud #FBI #News