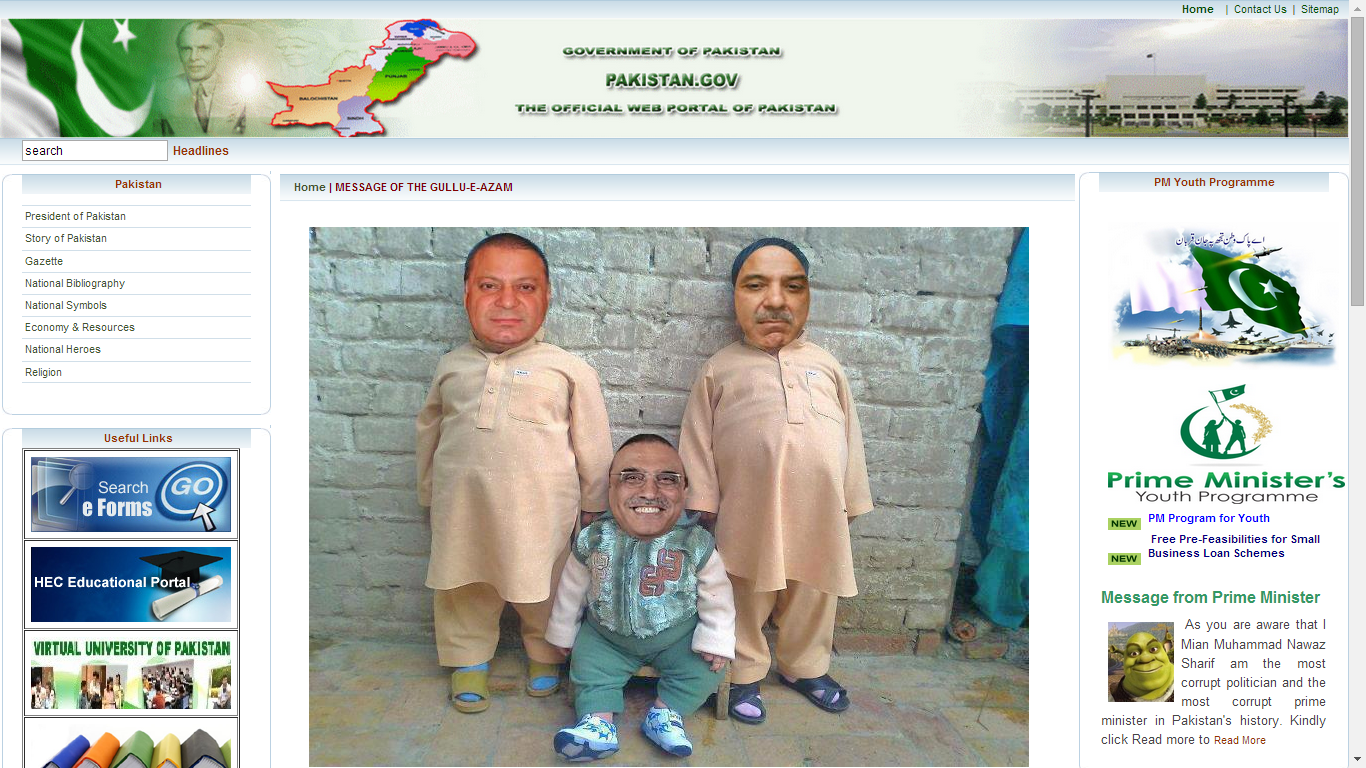 Just a few minutes back, the official web-portal of Pakistan Nation (pakistan.com) has been hacked. It is not clear who had hacked the site but this is not the hack for deface. Hacker have not defaced the site, but he/she have added a message on the site, with the troll image of Pakistan politician.

Hackers have added a post/ page with the title - 'MESSAGE OF THE GULLU-E-AZAM' (http://www.pakistan.gov.pk/gop/message.html) on the site. The message contains the troll or cartoon type edited image of the Pakistan Politicians. On the image, hackers have made a troll of Pakistan Prime Minister - Nawaz Sharif, former president of Pakistan- Asif Ali Zardari.


As you are aware that I Mian Nawaz Sharif am the most corrupt politician and the most corrupt prime minister in Pakistan's history. I have been killing innocent people from a long time now. Therefore, many people named me as a "Killer" and a "Murderer". Few days ago, I had sent many Gullu butts to Islamabad at Imran Khan's Azadi March in police uniform. All Pakistani's wanted me to resign, therefore I told my Gullu butts to start killing innocent children, women and men at the Azadi March. I always cheated in politics and I always will.
However, I am not the only one that is killing innocent people around in Pakistan. One of my best friend "The Joker AKA Asif Ali Zardari" who killed his own wife and wifes brother is working with me too. Our plan is to destroy Pakistan nice and slowly. People always wanted a change in the country, but we never gave them and never will !


After reading the above paragraph posted by the hacker, seems that hacker is hardly hates the Pakistan political parties.

This is very nasty situation that when any of the countries official portal get hacked and defaced. This gives the idea of the security for government sites, how they keep the sites security updates.

It is not been  cleared yet how hackers have managed to hacked into the Pakistan web-portal.