Yet another Snowden leaked documents reveals more secrets of the U.S National Surveillance Agency, and this one is quite unexpected. According to The Intercept post, the National Security Agency is secretly providing data to nearly two dozen U.S. government agencies with a “Google-like” search engine built to share more than 850 billion records of users. These records includes the phone calls, emails, cellphone locations, and internet chats, that NSA have recorded.

These data were directly accessible by domestic law enforcement agencies like FBI, GCHQ. The NSA search engine is named as ICREACH, which is cited the Federal Bureau of Investigation and the Drug Enforcement Administration as key participants. 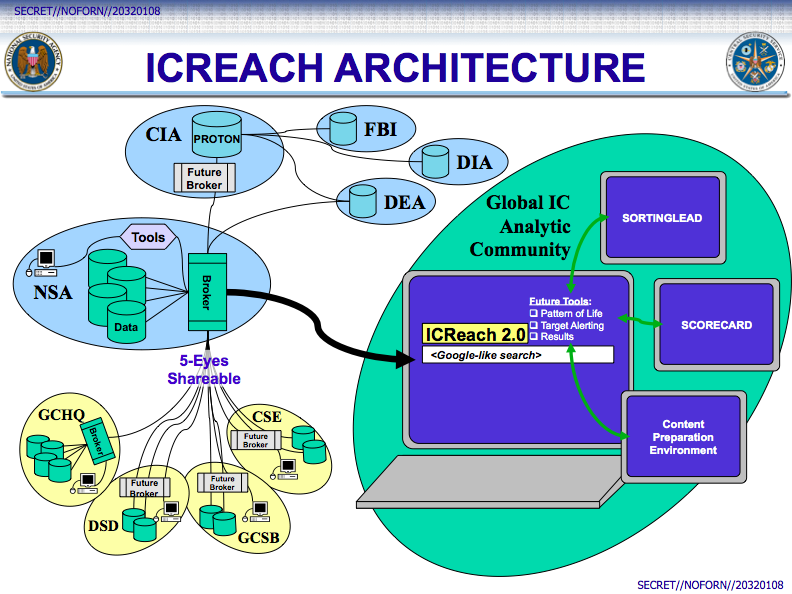 The Intercept mentioned that, the documents received from the Edward Snowden stats, ICREACH contains the millions of users private information and private communications of foreigners. There are details of such users also who have not been accused of any wrongdoing, and all the details are in archive.

The leaked documents reveals that from 2007 lists the DEA, FBI, Central Intelligence Agency, and the Defense Intelligence Agency as core members of the NSA search engine. Snowden also mentioned that, ICREACH has been accessible to more than 1,000 analysts at 23 U.S. government agencies that perform intelligence work, according to a 2010 memo.

ICREACH is capable of handling two to five billion new records every day, including more than 30 different kinds of metadata on emails, phone calls, faxes, internet chats, and text messages, as well as location information collected from cellphones. ICREACH do not have a direct relationship to the large NSA database. As there are tonnes of data with NSA so it have more than 200+ database and which are accessible to the limited analysts. The data base of NSA is accessible to a small number of NSA employees and can be searched only in terrorism-related investigations. But ICREACH grants access to the vast number of users.

Thereare further more Reports and Documents published with this article, and can be found from the below links-
Source: The Intercept
#Edward Snowden #News #NSA