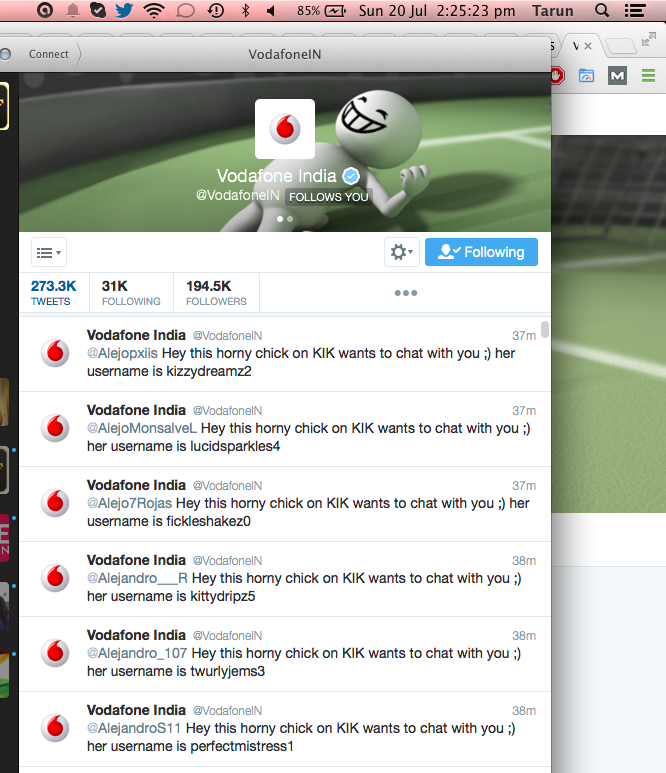 Last weekend. the official twitter account of Vodafone Indian (@vodafoneIN) have been hacked by the unknown hacker. With the compromised account hacker have posted some inappropriate tweets and message to its followers.

Vodafone Twitter account is a verified account, having the more then 195k followers. This if the hackers have post some phishy link or some malicious link then there would be number of users get the victim. But hacker have just posted the inappropriate text continuously.

The spam tweets was last for more than two hours before the Vodafone twitter handler came to notice about the compromised. But within these two hours thousands of its followers have started making fun with the Vodafone India, and comments some kickout tweets.

After gaining back the twitter account Vodafone India have confirmed about the hack and deleted all the spam tweets.

Earlier today, our Twitter account was briefly compromised & some inappropriate messages were sent. These comments have been removed. (1/2)
— Vodafone India (@VodafoneIN) July 20, 2014

We assure you that our customer service is happy to help as always on any service related queries. (2/2)
— Vodafone India (@VodafoneIN) July 20, 2014