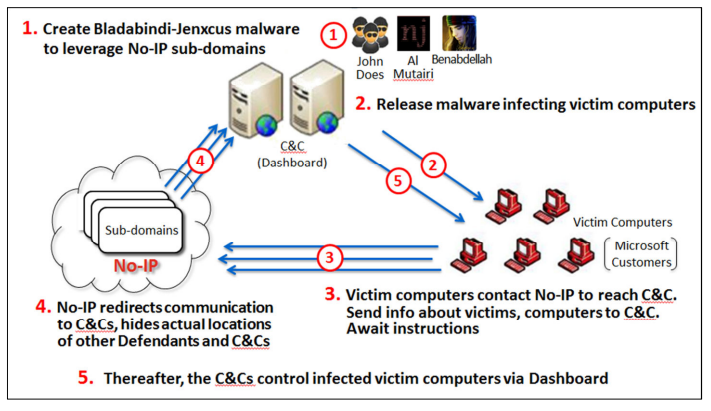 This morning was a bad day for the dynamic domain name services from No-IP.com, as its suffered from the outages on Monday after Microsoft seized 22 domain names. Microsoft have claimed that the service is being abused in malware campaign which infects million of Windows system.

Microsoft security team have been investing on the targeted traffic that is been generated from the no-ip server which are involved in the malware campaign, which went by the names Bladabindi (aka NJrat) and Jenxcus (aka NJw0rm). The order for the operation is been granted by a federal court in Nevada. Nevada-based No-IP Dynamic DNS (DDNS) service is very useful service but its sub-domains have been abused by creators of malware for infecting millions of computers with malicious software at large scale.


Microsoft pursued the seizure for No-IP's role "in creating, controlling, and assisting in infecting millions of computers with malicious software—harming Microsoft, its customers and the public at large."  He added: "We're taking No-IP to task as the owner of infrastructure frequently exploited by cybercriminals to infect innocent victims with the Bladeabindi (NJrat) and Jenxcus (NJw0rm) family of malware."

Over past year Microsoft have found that more than 7 millions of windows system were infected by Bladabindi and Jenxcus malware, via which attacker have the full control of users’ computers, steal passwords, and turn on webcams and microphones.

Moreover, Microsoft attorneys said No-IP is "functioning as a major hub for 245 different types of malware circulating on the Internet."

On the statement Vitalwerks (mo-ip) have accused Microsoft for allegedly affecting millions of innocent users, who are currently experiencing outages to their services because of Microsoft’s claimed.

No-IP Marketing Manager, Natalie Goguen says that Microsoft had never contacted them for the abuse of the service, or asked to block any of the sub-domains.

There are many Free Dynamic Domain Name Services (DDNS) available the Internet, and Microsoft have warned all of them about the abuse of the service, and asked them to take strict action for the service abusing.