#OpPayBack, Anonymous DDOS US Military Server, US server were DDOS, What is DDOS, taken down the site, anonymous activity, hacking is an art, anonymous news, Anon news

Earlier today the online hacktivist group Anonymous have run a campaign of massive Denial-of-service attack (DDOS) on the US Military server and put all the US military website offline.

The operation was conducted with the name as Operation Payback. On this operation about 19 high profiled sites of US defense belongs to US Army, US Navy, US Marine, and US air force have been taken offline for several hours.

After the DDOS some of the sites we found to be working but at the mean time once again all the site have gone offline. The reason for the offline is not been clear, may the hacktivist group have once again DDOS the server to put the site remain offline.

Success of operation was announced by the group on their twitter handle @Anon_Centre. You can get the list of the site target by the hackers group in Pastebin. 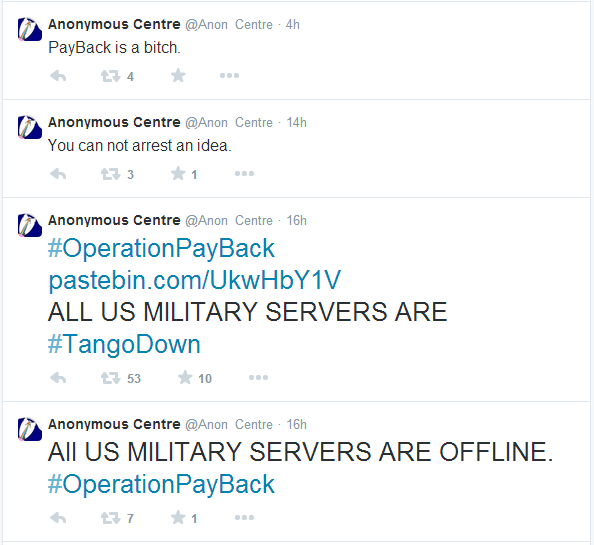 You can check the screenshot which shows that Army.mil is offline for everyone.

Stay in touch with us, as we will update the post as we get further information on this.
#Anonymous #Hacking