Just a Minute ago, twitter users is having problem with its service. As users from all over the world have reported the issue. It seems that Twitter is having the technical problem on its account login system. As all the users who is logged in onto their account, have suddenly logged out.

Twitter sites is working fine, but none of the users from all over the world is able to log in to their accounts. As we have also tried many times, but after having the login details, it is again redirected to the same login page, or showing the page with the message reading, "Something is technically wrong."

This is not for a specific country, as this issue is all over the world. You can check the below image that user from all over the world is having the issue. Different users from different location have reported the issue on to our Facebook page. 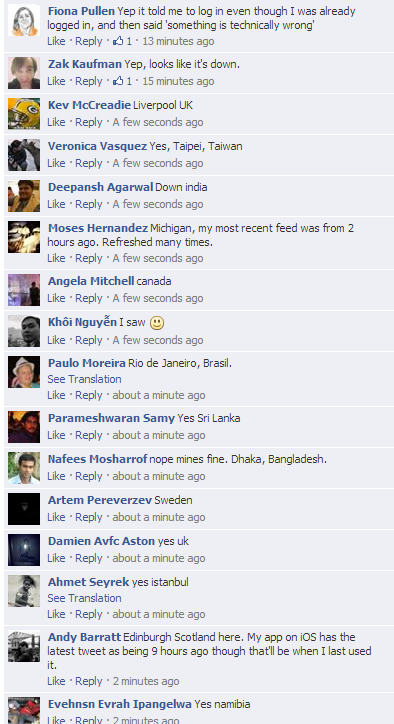 At the mean time problem is still there.

Just a minute ago, Twitter team have respond for the issue, as says


Most users are experiencing issues accessing Twitter on web and mobile apps. We’re looking into it.

UPDATE:-  Twitter confirm the issue and currently they have down the site for Maintenance.

UPDATE (12:20) :- So finally twitter is back on the track, as now its working fine. Its seems that the issue has been resolved. may be there is the chance that, some of the users around the world is still having issue, but it will take little time to be fine.

Most users were impacted by a service outage when accessing Twitter via web and mobile apps. Service is restored. Thanks for your patience!
— Twitter Support (@Support) March 11, 2014