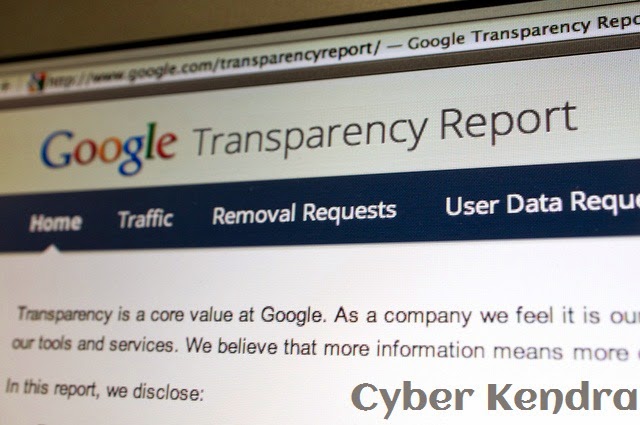 With the Activity of NSA which is collecting users information, and for this many of the tech giants companies have received a number of request letter for the users information from NSA.  Google is the first company to disclose information about National Security Letters to fighting for the ability to publish more about FISA requests, Google have continually advocated for users right to know.

Today, Google have published its 9th Transparency Report. On this report Google reveals the details the number of government requests that Google received for user information in criminal investigations during the second half of 2013. Google stats that about 120 percent requests for user information in criminal cases have increased. As Google users expanding in a regular basis, on the same time government request is also getting higher.

Google have discussed, How they have pushed back the request, along getting teamup with eight other companies in a following words-

"We consistently push back against overly broad requests for your personal information, but it’s also important for laws to explicitly protect you from government overreach. That’s why we’re working alongside eight other companies to push for surveillance reform, including more transparency. We’ve all been sharing best practices about how to report the requests we receive, and as a result our Transparency Report now includes governments that made less than 30 requests during a six-month reporting period, in addition to those that made 30+ requests."


Google have also published a video demonstation which explains how they respond to search warrants in the U.S