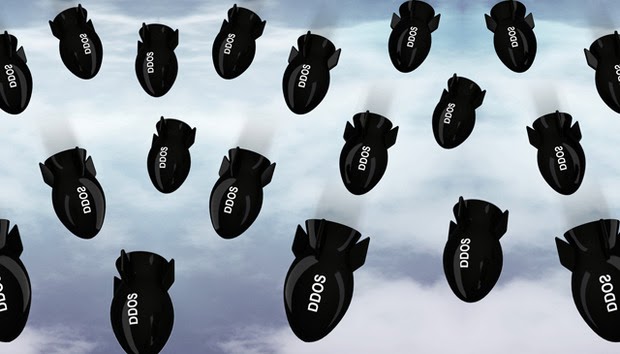 This is another big news to the cyber world that, DDos attack that is most common and popular attack used by the hackers to shut down the service of a host connected to the Internet have reached a higher attacking speed by breaking the earlier biggest DDos attack of 300 Gbps that was recorded in the Spamhaus DDoS attack, which almost the broke the internet.

To boost the attacking speed of Distributed Denial of Service attack (DDos) sizes hackers uses a new tricks called "Amplification Attack" that was named in 2013 over last year biggest DDos attack of 300Gbps.

Yesterday, hacker have succeeded in achieving the highest peak of DDos attacking speed of more then 400Gbps by applying the same method targeting the content-delivery and anti-DDoS protection firm Cloudfare data-server of Europe. Amplification attack provide the benefits of obscuring the source of the attack, while enabling the bandwidth to be used to multiply the size of the attack.


“Very big NTP reflection attack hitting us right now. Appears to be bigger than the #Spamhaus attack from last year. Mitigating,”
“Someone’s got a big, new cannon. Start of ugly things to come,”

Attacker found the vulnerability on the one of the protocol of cloud Network Time Protocol (NTP) which synchronize computer clocks. Hackers have leveraged the NTP servers by sending small spoofed 8-byte UDP packets to the vulnerable server that requests a large amount of data  to be sent to the DDoS's target IP Address.

Company says that, all the version of the of ntpd prior to 4.2.7 are vulnerable and are recommended to upgrade it to the latest version. It also mention that, Until all the misconfigured NTP servers are cleaned up, attacks of this nature will continue.
#Internet #News #Security