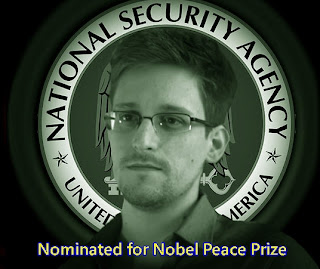 Former National Security Agency contractor Mr. Edward Snowden has been nominated for the 2014 Nobel Peace Prize, saying his disclosures of secret U.S. documents have contributed to making the world more peaceful. Baard Vegard Solhjell, a former environment minister, and Snorre Valen said on Wednesday the public debate and policy changes "in the wake of Snowden's whistleblowing has contributed to a more stable and peaceful world order."

Mr Snowden, who had worked as a contractor for the National Security Agency.previously he has already disclosed truth on RSA Token security leakage. where he reveled about NSA gave $10 Million to RSA for keeping encryption week.

According to the Norwegian Nobel Committee's rules, Solhjell and Valen are qualified, as national lawmakers, to make a nomination. Being nominated means Snowden will be one of scores of names that the Nobel committee will consider for the prestigious award. The five-member Nobel committee won't confirm who's been nominated. Saturday is the deadline for nominations from a range of people, including members of national parliaments and governments, university professors or previous laureates.

The Nobel Prize committee members can add their own candidates at their first meeting after Saturday's deadline. The winner will be announced in October. The Organization for the Prohibition of Chemical Weapons won last year's Nobel Peace Prize.

Ethical hacker working on Information security domain over 9 years now and he is very choosy about anything related to tech. youtubefacebook twitterinstagram
#Edward Snowden #News #NSA