Google adsense, on which thousand of web publisher rely for the monetizing their web content, will be coming with the very good news for Indian users.

Ya there is a good news for the adsense publisher Indian users. Till now Google adsense use to pay only via cheques, which not only took long time for publishers to receive their payments, but was fraught with issues like non-delivery of cheques due to courier partner issues. Some time its received too long, as the expectation of the users.

But now here is the Good news for the Indian Adsense users that, Now Google will pay your earning via EFT (Electronic Fund Transfer) also. By EFT the payments would be done in not more than 2 days after earnings are finalized.

Though Google have not announced this officially, but the thread on the Google product forum clearly stats that they are testing EFT payments for India based publishers. The thread was started by one of the adsense users "Om Software", to protest the delay in delivering the Adsense payment checks in India. Here is the reply from authorized representative under the username “Adsense Pro Payments.”


Mishrakolkata: I’m certainly hoping that we’ll be able to start making this option available before the end of the year. We’re very eager to get electronic payments available in India, and we’re working to make this available as quickly as possible. 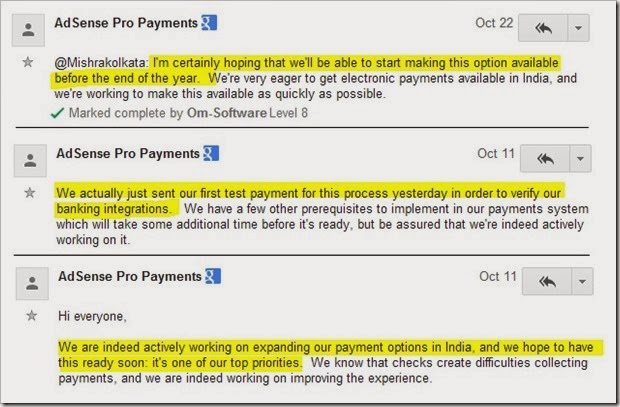 The above screenshots is of the thread, where “Adsense pro payments” mentions multiple times that they are hopeful of bringing the EFT payments by the end of year.

This thread was created on the 22nd October, and its is clarifying that Google is bring the EFT payment option for Indian users.

We are sure that this will make the smile of the many of the Indian Adsense Users.
Google Product Forums Thread
#Google #SEO