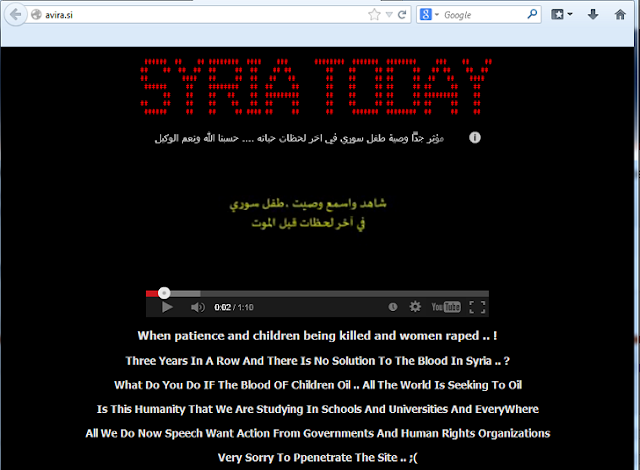 After Syrian Electronic Army notified for the wanted terrorist group by FBI, Syrian electronic Army's hackers are hitting the cyber space regularly.
Hacker of the SEA going with the handle "Dr.SHA6H" has hacked the official site of the a Slovenia-based Avira distributor (avira.si) and the official website of the United Nations in Armenia (un.am).

Both the hack was to protest against the conflict in Syria, killing of children, raping of women and asking human rights organization to help the Syrian people. It can seem by the message left by the hacker on the deface page which states that,
When patience and children being killed and women raped! three years in a row and there is no solution to the blood in Syria? what do you do if the blood of children oil… all the world is seeking to oil..Is this humanity that we are studying in school and universities and everywhere? all we do now speech what action from government and human rights organizations!

At the time of writing website of the United Nations in Armenia is offline and site of the Avira distributor is showing the 403 error. This means that admin of the both the sites are working on the site.

As soon as Avira representative notified for the hack, they've informed the distributor of the hack and instructed them to fix the website immediately.

You can see the deface of Avira and United Nations in Armenia.
#Defaced #News