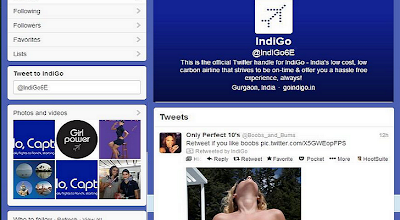 On the response to the customer question regarding the offensive tweet, Indigo wrote,


“We are sorry that went from our account. We are investigating whether there was a security breach,”

Till now company is investing about the tweet, and yet not confirmed for any kind of security breach. If it was the security breach then it shouldn't be surprise anymore, as can see that large number of the twitter accounts of major organisation are being compromised every week.

All the hijacked accounts of major organisation are being abused for spam.
#News