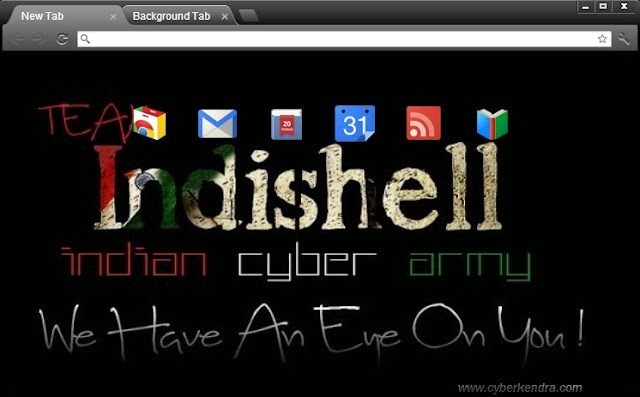 This is a great news to all the guys who love to design the desktop and make the system look nice. All of you know about the core team of Indian Hackers name as "Indishell". Indishell is the team of Indian hacker who hack for India, who dedicated their life for securing their beloved motherland India. They have led many wars for the country and were successfully completed letting the mighty Indian flag high in the sky.
One of the fan of Indishell  have design a new theme for Google chrome . They name the theme as a team name "Indishell"
The look of the them is awesome. It is in black color , having the Indishell image at the background. It have a hackers look. There is some change on it tab and its color.
Theme has been designed by the one of the fan of Indishell know has "Resister Ion"
As developer say that there will be Mozilla Firefox theme is also coming soon.
Message by the Indishell