Microsoft will pay to user for making Windows 8 app 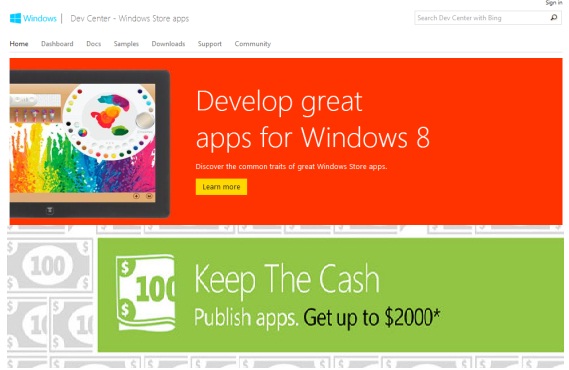 As Windows 8 is new till now, and hence there  are less numbers of apps for it. Microsoft is constantly working to increase the newly featured apps but that is not sufficient as Microsoft thinks.  It is being cleared that Microsoft needs more apps in their stores, lack of the modern tools is one of the main factors for the shortage of the apps in the Microsoft store.

Microsoft is managing many campaigns to encourage the developer to create a windows 8 app. Microsoft is also offering  $100 (€77) for each approved apps on the store to the developer. This promotional campaign is for both Windows 8 and Windows phone 8 developers. But this have some limit for the developer. Limit is that each developer can create maximum 10 apps for each platform. This means that developer can earn $2,000 for developing 10 apps for both the platform.
This campaign have been started from March 8 and will be going on till June 30. All the money will be payout through virtual Visa card for each qualified developer.
Developer can Sign Up from Here
#Microsoft #News