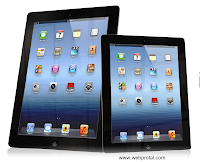 Apple's next version Ipad, Ipad mini  is going to be launched on October 23 of this year.
Keeping in view, the demands of product in the market Apple is launching its next version of Ipad,  Ipad mini by the end of this month. There will be the collision with Nexus and Samsung Galaxy Tab 7. It is estimated that this device will have the Retina display feature also
the Device is based on Operating system IOS6. Because of its performance and long life battery feature, Apple have featured with its mobile chip also. Cost having Rs 19,250 - Rs 22,000 of this, Ipad storage capacity will be from 8GB to 16GB.
If Ipad will launched on 23rd October then there will be a chance that it will be available in India by the end of this month also.
#News