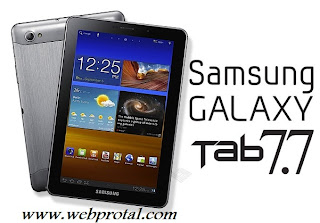 Samsung bringing its latest tab on the Market "Samsung Galaxy Tab 7.7 "
This is the latest gadgets introduce by the samsung and which is also based on Anodriod. Thre are many things New in this Tab as that is comfortable for user to use it.

Features:-
● Samsung Galaxy Tab 7.7, which is basically based on Android so it runs on operating system known    as Google Android 3.0 Honeycomb.
● It has 1.4GHZ dual core processor so it will be preety fast and new.
● Tab is having 3MP camera on rear face with LED flash and 2Mp on the front face.
● Samsung Galaxy Tab 7.7 has a metal design but its weighs is only 340 gm.

The most interesting thing on this is that it havce the calling facilities also. This Tab have been upgraded to make the user a voice call privately by using receiver modes in public places. user will not requeried any kind of headset or a bluetooth for voice calls.

●Watch the preview of it