UIDAI has called out top 20 hackers to find any vulnerabilities in its security system. 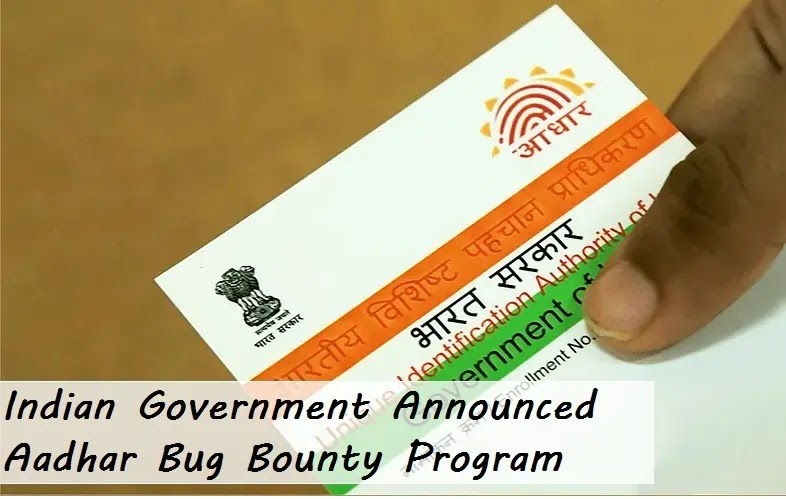 Unique Identification Authority of India (UIDAI) has announced a Bug Bounty program for Aadhar to find out any vulnerabilities in its system.

There has for long been a demand for such an exercise as multiple claims have been made regarding loopholes in the security of Aadhaar data. Calling ethical hackers is one of the great steps from the Indian Government.

Aadhaar is the world’s largest digital identity program that provides for good governance, and efficient, transparent, and targeted delivery of subsidies, benefits, and services to over 1.32 billion Indian residents. UIDAI consistently undertakes strategic security initiatives to strengthen its foundational security infrastructure for secure and safe delivery of Aadhaar services. In its endeavour to secure Aadhaar data hosted in UIDAI’s Central Identities Data Repository (CIDR), UIDAI intends to conduct a ‘Bug Bounty’ program along with responsible disclosure of vulnerabilities.

UIDAI is the first government agency to conduct such a program. It is not clear from the order if the ethical hackers will be paid for the exercise. But they will be registered or empanelled before being brought on board. In order to conduct the ‘Bug Bounty’ program, UIDAI has made the following terms and conditions for participating in the Aadhar Bug Bounty program -

From the above Empanelment / Registration Criteria it is clear that UIDAI will examine the candidate's last one-year stats of  HackerOne, Bugcrowd, etc reputation and ranks for enrollment into the programs.

Aadhaar is a 12-digit individual identification number issued by the Unique Identification Authority of India on behalf of the Government of India. The number serves as proof of identity and address, anywhere in India.

Any individual, irrespective of age and gender, who is a resident in India and satisfies the verification process laid down by the UIDAI can enroll for Aadhaar. Individuals need to enroll only once but in case of multiple enrolments, the Aadhaar is generated against one of the enrolment ID’s while others are rejected as duplicates. Aadhaar Enrolment is free of cost for all the residents of India.

The aadhaar number is unique for each individual and will remain valid for a lifetime. The aadhaar number will help the residents to avail of various services provided by banking, mobile phone connections, and other Govt and Non-Govt services in due course.

Some other information about Aadhaar are:

According to the circular released by the Unique Identification Authority of India  (Information Security Division), the Government has clarified the registration process as well.
Interested participants may submit their application to [email protected] including any
queries by applicants. UIDAI says its endeavour is to secure Aadhaar data hosted in the CIDR, “along with responsible disclosure of vulnerabilities”. No candidate can be a current or former employee of UIDAI or one of its contracted technology support and audit organizations during the past seven years.
#Bug Bounty #India #Security