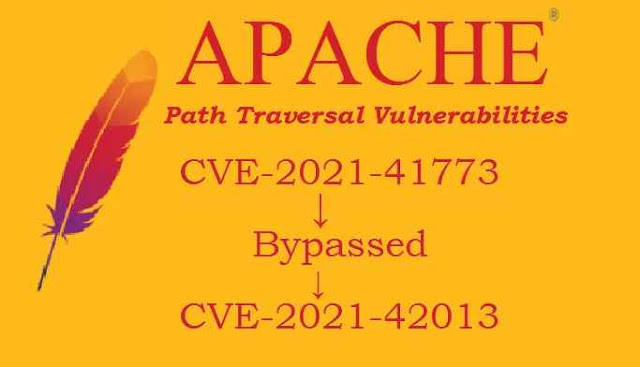 A couple of days back we have reported a Path Traversal Vulnerabilities (CVE-2021-41773) in Apache HTTP Server 2.4.49, which was exploited in wild. As soon as the details of the bug were revealed PoC exploit of vulnerability was released. An attacker could use a path traversal attack to map URLs to access files outside the document root directory of web servers based on Apache.

Apache developer team patched the bug and released the latest version 2.4.50. A security researcher, Shungo Kumasaka have found a way to bypass the fix of CVE-2021-41773. In the blog post, he detailed his finding.

From above he noticed that the evaluation pattern for the path was fixed. Therefore, he evaluated whether the countermeasures work for character strings other than " % 2E " and " % 2e ". Later on, he found that percent-encoding is evaluated recursively. For example - " %% 35% 66 " is converted to " % 5f " and interpreted as " _ ".

Kumasaka contacted the Apache Security Team with his bypass and PoC exploit. Apache team confirmed the bypass and released another fix with version 2.4.51, also they allotted this bypass with CVE as CVE-2021-42013.

Finally, Kumasaka recommended all admins who are using Apache HTTP Server 2.4.49 or 2.4.50 to upgrade the server to 2.4.51. If you cannot upgrade, you can avoid it by setting Apache HTTP Server so that the directory outside DocumentRoot is " require all denied " as described in the Apache advisory. However, it is recommended to upgrade because there is a possibility that a vulnerability may occur due to the omission of consideration in the configuration file.