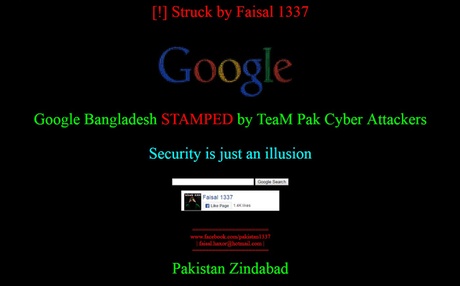 A hacker called Faisal Leet have hacked into the domain registry of Bangladesh Telecommunications Company Ltd (BTCL), from where Google country domain was also registered. Hackers have modified the DNS records of Google Bangladesh and redirects all users to deface page. This technique is also know as DNS poisoning.

Not only Google Bangladesh, hacker have also changed the DNS records of Yahoo Bangladesh domain (Yahoo.com.bd).

On this issue Google had quickly redirects its users to its main international .Com domain i.e. www.google.com.

And on this redirection BTCL team have fixed the issue, by restoring DNS properly.

This is not the first time that hackers have targeted Google domain. Earlier also Pakistani hacker called LEET have hacked numbers of Google countries domain. Not only Google, he had also targeted other high profiled sites including Microsoft, Yahoo, Bing, AOL, and many Indian NIC servers.