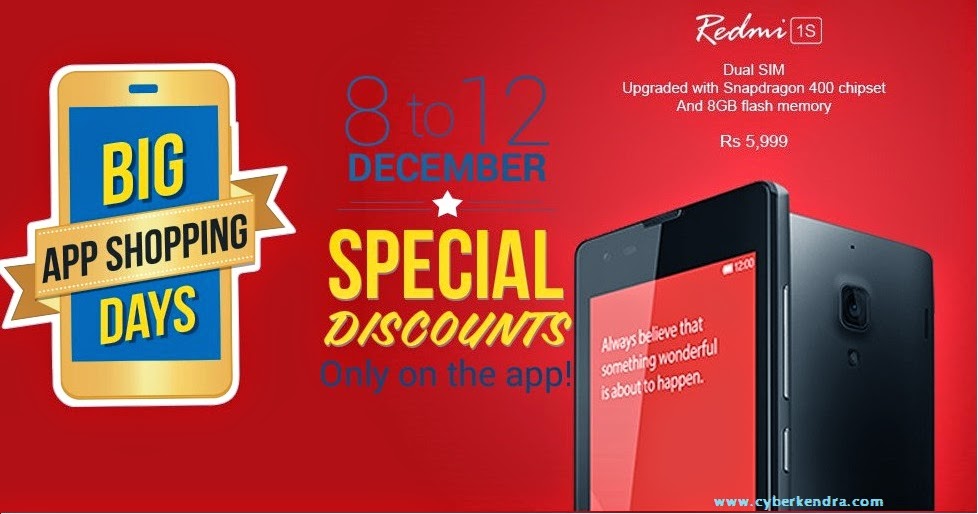 India's leading eCommerce site Flipkart is giving another great offer for its customers. Recently Flipkart offered a huge discount deals on its Big Billion Day, and as per the reports Flipkart have made a business of Rs 600 crore. Now again Flipkart have brought a discount offer campaign for its customers and named the event as Big App Shopping Day 2014 which will be availble from 8th December to 12th December, download FlipKart Android app.

Flipkart is a also an official online distributors of Google, and last time Google have announced its smartphone MotoE publicly via Flipkart. It was record that in 22 minutes the MotoE stock was finished.

Not only this, recently another China based company Xiaomi have also launched its popular smartphone Redmi 1S on Flipkart. Redmi 1S was so popular among its users that last time product gets out-of-stock within 2 hours of launch.  Flipkart noted that they have sold 65,000 units of Redmi 1S within that 2 hours of peak sale.

So in the eve of Big App Day Flipkart is again selling Redmi 1s on its stores so get prepared yourself.  On these offer days Flipkart will give you extra special discount to its customer. If you are also looking to grab Redmi 1S then you can directly grab it from Flipkart offer page. So hurry up.. get your Redmi 1S before it gets out-of-stock . Don't miss the chance.
#Flipkart #Offer