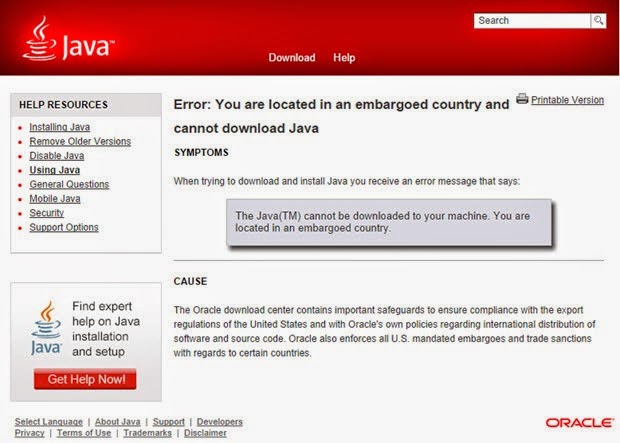 May Russian citizens are losing all the freedom over internet, as after the several censorship over social network and also trying to taking control over the citizen for using internet, now another issue have been came out.

One of the most popular software that almost every user have into there system "Java", showing the censor message to the Russian users. Many of the users in Russia reporting that the attempts to install Java are being redirected to a error page which says that installation is forbidden under a legal embargo.

The error page showing the official ban is located in the Russian (ru) directory of the Java.com. The page is not showing the depth details of the ban, and neither there were a news came out for the issue. Since yet Oracle team has also not commented on this, but We have tried to contact Oracle on this.

According to the Oracle, the Java Runtime Environment is found on over 850 million PCs and banning of the popular software like Java will be nasty situation.

As we get more details on this official ban, we will update this post. Stay Tuned
#Java #News