An unknown hacker have hacked the American based media "Wall Street Journal" Facebook page and posted  crash reports of Air Force One. On the same region here Malaysian MH17 shooted down. As the Facebook page of WSJ is actively popular, readers had took the news seriously as the Air Force One ferries the President of United States of America. 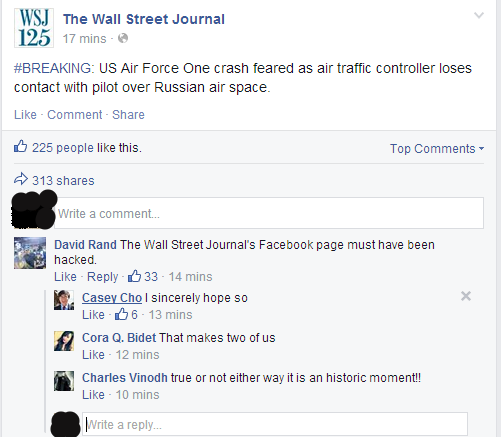 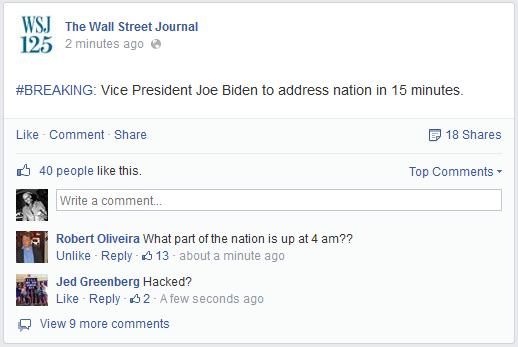 After some time (about 15 minutes) of the first post, hackers have also posted the news of Vice President Joe Biden addressing the nation (USA) in 15 minutes. With this news readers were confused too. The Air Force One is the official air traffic control call sign of a United States Air Force aircraft carrying the President of the United States. In layman terms it refers to the Air Force aircraft specifically designed, built, and used for the purpose of transporting the president.

After some minutes of the hackers post, Wall Street Journal have confirmed that their Page have been compromised and says all the post were fake. As there were no such damaged caused as non of the major  media have carried such news on the topic.

This shows that how a social media can make change or bring changes on our daily life. It was good that attacker have not used or post any spam link, which targets Wall Street Journal readers. As page is much popular with the 2.8 millions of likes and with the 135,000 of daily active users, attacker can easily get the tonnes of the victims.