In India there is an increase  in the cyber crime by 51 per-cent of cases to be filled in the court. This is not the unexpected thing but the increase in the cyber crime has mainly noted from country's technocrat's states like Andhra Pradesh, Karnataka, Maharashtra. However these three states is connected to Information Technology (IT) or with the relate of IT gives about 70 per-cent of the total revenue of IT sector in country. This state has be revealed on the latest National Crime Record Bureau (NCRB).

Cases filed with IT Act
In the respect of new IT Act, the cases related to cyber crime that was filled in 2013 was 4356 in counts and this year it is increased by 51 per-cent in comparison to previous year, which means 6577 (approx).

Top States in Cyber Crime
According to the latest report of National crime record Bureau, in 2013 there were 681 cyber crime cases has been registered in Maharashtra. which is increased stats by 44.6 percent as compare that of 2012.

Andhra Pradesh recorded 635 cases of Cyber Crime in 2013 which has been increased by 48 percent from the previous year, where as Karnataka recoded 513 cases in 2013, increased of 24 percent from 2012.

Uttar Pradesh holds the fourth postion in cyber crime reports, with 372 cases in 2013, followed by Kerela, Tamil Nadu and Bihar. Check the list below with the information.
Note:- Below is just a Top 10 state. For full information check below. 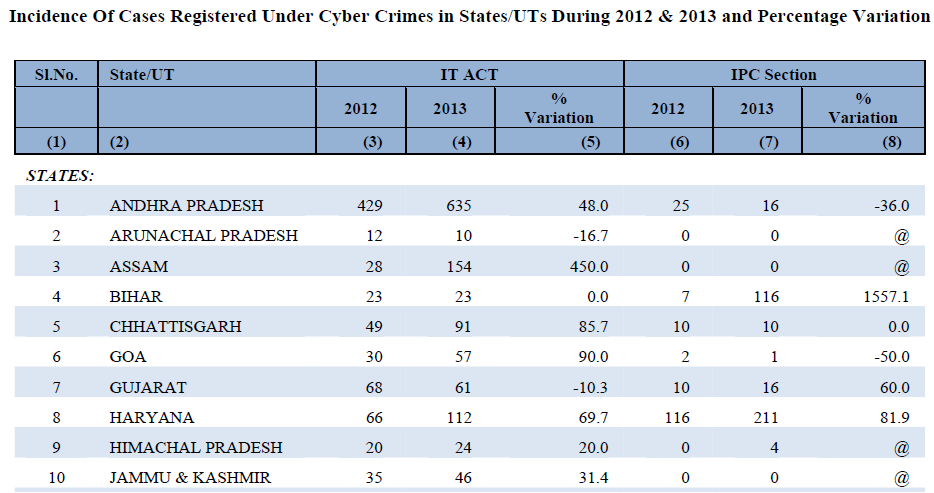 Banglore- Top in Cities
If we see the cyber crimes in cities, then country's IT capital city 'Banglore' is in the top of the list. It records 399 cases in 2013, where as Andhra and Visakhapatnam had 173 cases, followed by Hyderabad and Jaipur 159 and 110 respectively.

Another IT city Pune records 97 cases where as Kolkata have 84 in numbers followed by Chennai which have only 5 cyber crime cases.

You can get all the information  Here and Download all information here
Note:- The document contains many information so just search for the "TABLE-18.1" for the related topic.