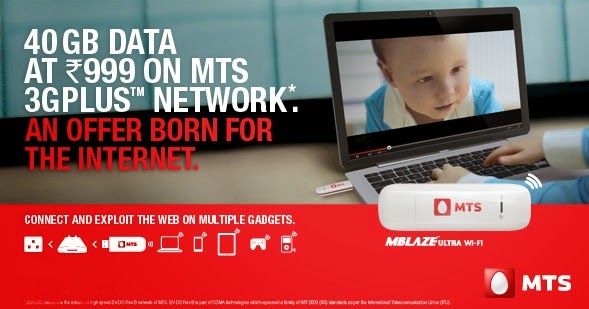 Sistema Shyam TeleServices Limited (SSTL) that provides the telecom service with the name as MTS has announced a new and a awesome data plan in the Country (India). The Plan name as "Super Unlimited", and with the name only MTS have brought a plane of 40GB in just Rs 999. This plan is to target the users who have big data usage. The new data plans are available for MBlaze prepaid and postpaid customers across all 9 circles of the country.

“MTS’ SUPER UNLIMITED data plans have been specially designed to provide at least 300% more value than plans offered by competition.”

“The SUPER UNLIMITED data plans are a follow up to the launch of our 3GPLUS telecom network and the recent success of MTS’ ‘Born For The Internet’ campaign,” he added, Leonid Musatov.

With this new plan, MTS offer, 40GB of data plan at Rs 999 for postpaid customer and 20GB for Prepaid users at the same rate. More over MTS also made a other plan available for the prepaid users as follows, high value prepaid plans of Rs. 1,298 for 25 GB and Rs. 1,498 for 30 GB.

This plan is available for both new and existing MTS customer's prepaid or  postpaid. Unfortunately the plan is not available through out the country. Only 9 circles will have the benefits of this plan which are, Delhi, Rajasthan, Gujarat, Karnataka, Kerala, Tamil Nadu, UP West, West Bengal & Kolkata.
#News #Telecom