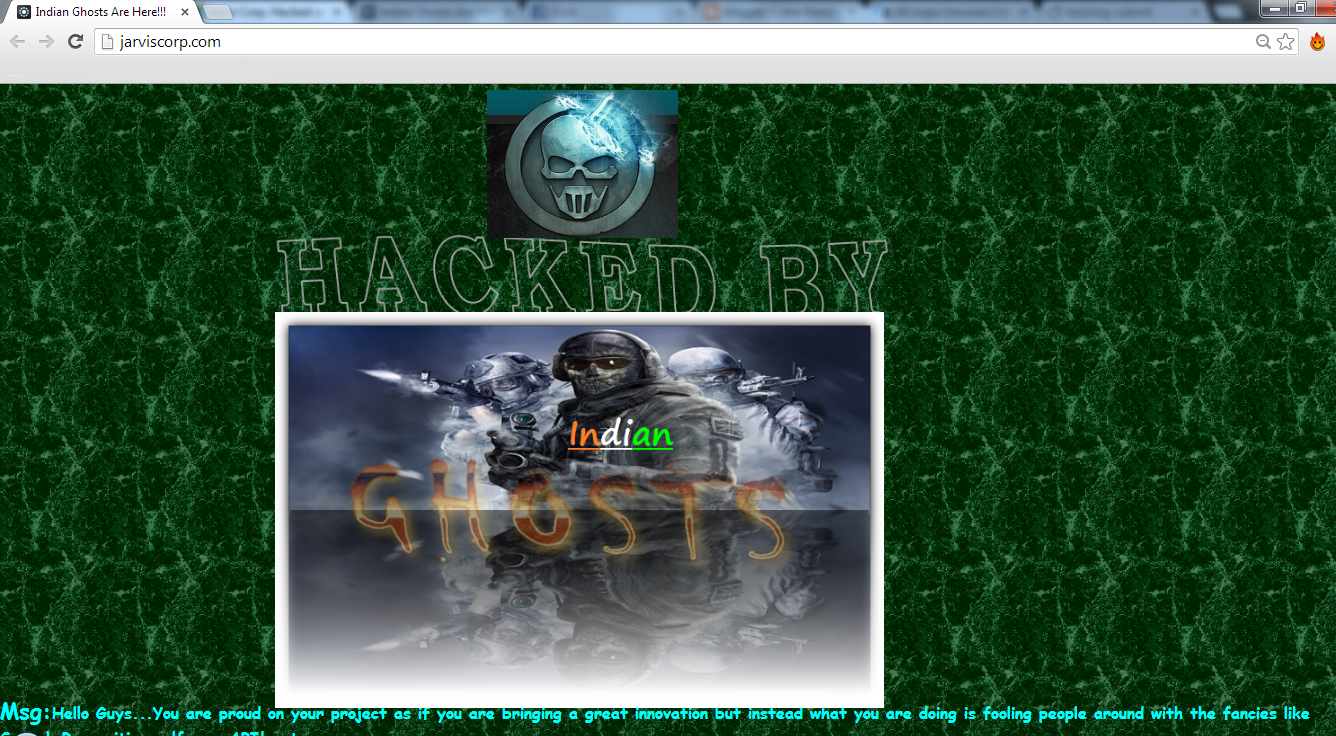 As earlier some Indian Guys were taken initiative to develop Artificial Intelligence Operating System called "Jarvis". As they were doing well and they also developed some Speech Recognition, wolframa, API’s etc. They are also proud of there work, but unfortunately just a minute ago, some hackers have hacked and deface its official site. Mirror of the hack.

Some Indian hackers group name as "Indian Ghost" have hacked and defaced the official site of Jarvis Corp (www.jarviscorp.com). On the deface page hackers have wrote some message to the Jarvis corp team and also warned them.
The Message follows,


Hello Guys...You are proud on your project as if you are bringing a great innovation but instead what you are doing is fooling people around with the fancies like Speech Recognition,wolframa,API's etc..
You say that you have created a new OS wheras we came to know that it was just a piece of java work and no OS thing has been developed by you ever,And I guess ifyou are so talented to do that :p
This hack was done to show your real face to people.We were astonished to see few guys are claiming to create an OS like Jarvis.It took a lot of time to get under you and find your real truth but now here we are breaching your security and breaching your fake OS thing...Also when we saw the source code of your so called developed version "Jarone2" ,we were astonsihed to see how easily are you fooling people,Taking codes from diffeent places and using at one place and also there has been no AI and just predefined codes on which it works.Nice idea to fool and gain popularity -_-
Stop these and do some real work else next time we promise to delete your complete domain and site and By the way we are exposing your reality and your source code of "Jarone2" to public..Hope you enjoy that Fellas....

With the above message  hackers have also leaked the source code of Jarone 2 (that can be download from here), which was developed by the team Jarvis Corp.

According to hackers message it states that, Jarvis Corp team have  copied other source code and implement to there work.
Exclusive Statement by Ex-Jarvis member
On this regards we have talked to ex-member of Jarvis Corp, by him also it is confirmed that team have copied other source code from Internet. When we have asked which code they have copied, he says, wolframa, Speech Recognition and different API's has been copied from internet.
Additionally he also says that, the Artificial Operating system that they claimed to developed is not actual OS rather it was simple Java App. The next developed called "Jarone 2" was also developed by copying code from different place. You can check the source code of Jarone 2, which was leaked by hacker.
#Defaced #News