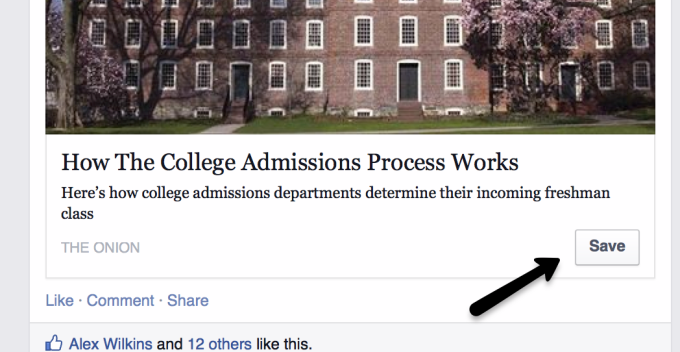 This month Facebook have made many changes on its look which includes News feeds, and Business Fan page. News feeds have got a whole new look, in which more focus is given on photos posts. After the Business categories Fan Page have also got new timeline look, and for this look we have already discussed it.

It seems that these changes is not enough, so Facebook is now testing another features called Read-It- Later with Save buttons on the users news feeds. When users clicked on the SAVE button it creates a section of bookmarked sites on your profile.

It’s been almost two years since Facebook acqui-hired the talent from Spool, a delightful read-it-

later app that could cache articles, videos and other content to your phone, so that users can read it later on, when he/she have free time. A few weeks later in July 2012, Facebook began testing a native Save button on mobile, but it never got rolled out.

“We’re constantly testing new features, but we have nothing further to share at this time.”

Users will get the Save button just beside the Like button, when he/she saw any link post that opens on the new tab after clicking on it. On the right side bar of the users newsfeeds there is another folder name "SAVED". When users clicked on the it saves a link to the article to a “Saved” section of their Timeline.
#Facebook